Posted by ericdbolton on September 13, 2017
all ages comic books comic book luke skywalker new comic book day new comics rey star wars Star wars adventures
+
Star Wars Adventures is an upcoming ongoing anthology comic book series set in the Star Wars canon. The IDW Publishing series, of which the first issue came out on July 12, 2017 on StarWars.com and was released physically as a part of SDCC promotion, while the series officially started on September 6, features stories from the entirety of Star Wars and is intended for all ages. The first volume will be released as a part of the Journey to Star Wars: The Last Jedi publishing program. STAR WARS ADVENTURES #1 : Each issue in this monthly series will feature two stories, starring your favorite Star Wars characters from all the films! This debut issue will reveal Rey's early adventures on Jakku as well as a comical tale of clone catastrophe! Preview of Issue 1 Star Wars Adventures is suitable for all ages and is available in comic book stores and online retailers. Thanks for checking out this post. Please leave a comment below to let me k
0

An American family vacationing in the Caribbean find themselves stranded on a deserted island without food or water. They are discovered by a cold-blooded fisherman who demands a ransom for their lives. A gruesome turn of events leaves the father in a terrifying high seas race to save his wife and son, and punish those behind the cruel extortion plot. I was given the opportunity to view the recently released Lionsgate ’s edge of your seat thriller Extortion and will give some minor spoilers below. Extortion (written and directed by Phil Volken ) stars Eion Bailey as Dr. Kevin Riley.  Kevin wants to give his family (wife Julie played by Bethany Joy Lenz and son Andy played by Mauricio Alemany ) the best family vacation in the Caribbean he can arrange.  Yet things go wrong when Kevin keeps making bad decisions. The first being renting a boat to charter from a local who is pretty lax on paperwork. With a seven second training program, Kevin takes the boat out and goes out a thr

Welcome to a new weekly gimmick from MCB where we will give a preview of an upcoming Key Comics.  A Key Comic is a comic where something special happens.  A first appearance.  A death.  A first appearance of a death.  The resurrection of someone who used to be dead (this week).  An origin or whatever. Key Comics are sought after for their uniqueness.  While they may not all hold value, they are important in the story line of that character or comic series. This list may contain spoilers.  This information is taken from solicitations and rumors.  If it is rumor, I will redact the information, but if the information has already been spilled on the preview solicitations?   That's on you. The Key of the Week For June 19th, 2019  Guardians of the Galaxy #6 Why is this a key? Well the Guardians and the Dark Guardians battle,  but that ain't nothing.  They battle all the time, buuut they also have to fight Hela and the Black Order!!!  AND THAT'S NOT EVEN THE E 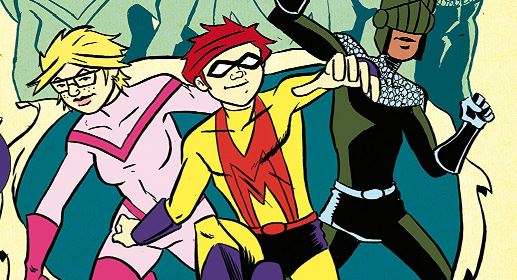 AMAZING AGE New from ALTERNA COMICS - Three teenagers spend their days creating comics until one day, the stories come to life! Stuck in a world of super-powered heroes and villains, they'll have to figure out how to save the day AND get back home in one piece! Amazing Age # 1 of 5 is Currently Available in Print and Digital Written by -  Matthew David Smith Pencils -  Jeremy Massie Inks -  Jeremy Massie Colored by -  Christine Brunson Lettered by -  Jeremy Massie OTHER TITLES FROM ALTERNA COMICS Thanks for checking out this post, please leave a comment below to let me know what you thought about it. Also, be sure to  subscribe to this blog  as well as follow me on  Twitter  and  Facebook . I appreciate you. Thank you for your time. - MCB