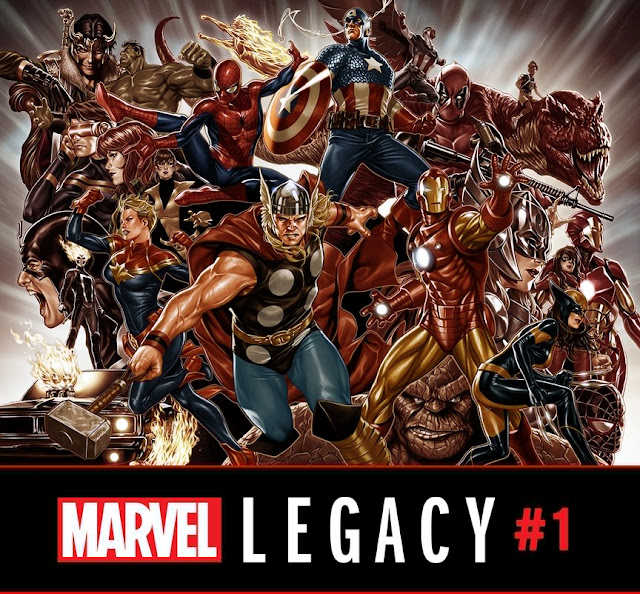 
Kicking off this September with MARVEL LEGACY #1, an over-sized 50-page, one-shot special, Marvel Comics titles step towards a bright new future – one that harkens back to what has made Marvel a household name while looking towards tomorrow. With fun and thrilling reveals primed to excite fans, both existing and new, this fall, prepare for MARVEL LEGACY!

To help promote the rebranding, Marvel released animated gifs of upcoming titles and the original cover artwork from the 80s/90s.

“A new initiative that will take things back to our iconic history, with a firm eye on the future, MARVEL LEGACY will present stories that remind everyone—newcomers and longtime fans alike—why Marvel stands as the premier name in fiction,” said Editor in Chief Axel Alonso. “Our titles will unearth gems from Marvel’s rich history, remind readers of connections between characters, and usher in the return of some major characters who’ve been missed.  Above all else, we want to inject our comics with a massive dose of fun!”

The relaunch will begin in late 2017 following the conclusion of the Secret Empire story line, with the release of a 50-page one-shot titled Marvel Legacy #1. Writer Jason Aaron and artist Esad Ribić are collaborating on the opening issue and laying the narrative groundwork for the line. The issue will see the return of a fan-favorite character into active service. Quesada teased the cover artwork for the opening issue, hinting at the possible return of Bruce Banner as Hulk, Tony Stark as Iron Man, Thor Odinson reclaiming the hammer Mjolnir, and the appearance of other superheroes in their classic costumes.

Following the release of Marvel Legacy #1, many Marvel comic series are expected to revert to their classic cumulative numbering system.Marvel is also creating a new and consistent cover design, that recaptures their work from the 1980s and 1990s, for their relaunching series.

Thanks for checking out this post. Please leave a comment below to let me know what you thought about it. Also, be sure to subscribe to this blog as well as follow me on Twitter and Facebook. I appreciate you. Thank you for your time. - MCB
captain america comic book marvel legacy new comics Spider-Man thor