But I play off my suckiness and blog about it. It’s good comedy when I talk about the d-bag team names the other people [in my brother's league] come up with. It’s like all they do is watch SouthPark, Family Guy, and UFC Matches while spraying AXE Body Spray on themselves giving each other high fives and forcing each other smell their farts.

My brother knows I’m not lying, it’s his league.

I told him early this year I was going to retire from sucking so bad at fantasy football and he begged me not to. It seems the only reason they want me around is to read my self-deprecating blog posts. They laugh at me on the score board and then again on social media.

This year I was hired by the Boltonshire Hobbits in his league. I can’t suck every year right? And if I do, will my own namesake fire me from their team? Anyways, I was ready for another season.

Then I got in over my head right away in a post from a college buddy: 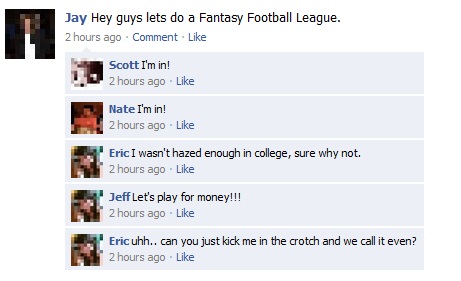 Now I was committed to two leagues.

I do my brother’s league because a couple might read my blog for a few weeks. My college buddy’s league? Heck, I don’t even think they know I have a blog. I’m doing this for the chance of winning money after being kicked in the crotch.

Then I put the word out that I was going to suck twice as much this season.

Luckily a friend of mind said he’d help me out on draft night.  Maybe my problem the past few years was that I was never available for draft night. I always set my.. uh settings… to pick the best available in the position order I … uh.. set.  This would have been the first time I would be part of a live draft. My brother’s league was set for this past Sunday night and I tried to get my college buddies to do it the same night, but they couldn't.

Anyways, it was an hour before my brother's live draft on Sunday. I made sure everything was taken care of. The kids were fed, they were bathed. My wife was showing the new baby to a friend (the wife of my friend came over first). Everything was set until my father in law called me and asked if I could go pick him up (his car was at my house and my mother in law wasn’t available to bring him).
Sonamagun!!
I poke my head in my room as to not give my wife a chance to get a full body shot.

“But I need to hurry, the draft is in an hour. They’ll slow me down!!! We discussed this….”

Then she gave me that look...
“Seriously?!!?” As she glances at our newborn who she just pushed from her body less than a week ago.

We made it back in time. I conversed with my father in law, but white knuckled it home.  Russ was about to show up when I sent a text to my brother. 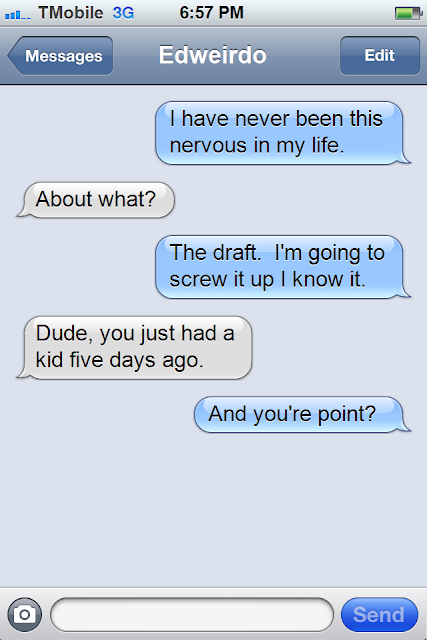 Russ and I are sitting there and he’s going over the strategy he and everyone else on the planet uses besides me up to this point. He pointed out the pros and cons of the different players and positions and the people that play with them.

While he was doing this, I decided to do some trash talking in the draft chat room. 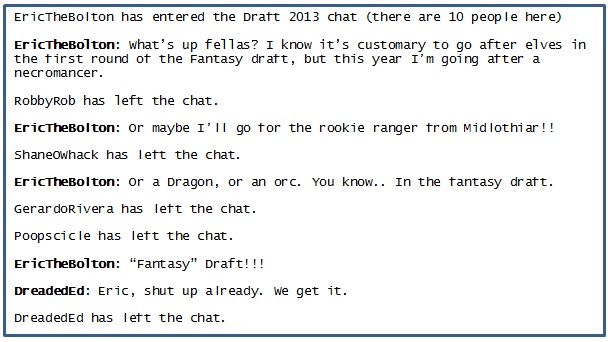 Fine. These UFC Cheering AXE Body Spray wearing guys, don't appreciate Middle Earth humor.  So  I had to play along like I knew what was going on.

After the draft was over, this was my team…

Russ was content with it and then so was I. Unfortunately, he would not be able to make it the next night for the next draft.

Like the night before, I had everything taken care of. It was an hour and a half until draft time and I had time to spare. I ran to the store, fixed me a dinner plate to take it back to the room and go over my settings. All is cool until I get this text… 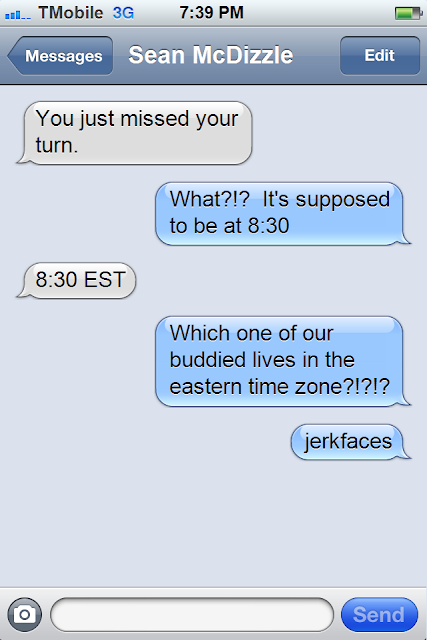 I rush to the computer and see I picked up two quarterbacks. Being number 9 I knew I wouldn't get the best running back, but I at least wanted one. My buds are wondering where the crap I was and some are giving me a break because of the new baby, blah blah blah.  I’m trying to salvage myself from the first two picks and I see I somehow still had Auto Draft on and I picked up two defenses in the third and fourth rounds.

Where was Russell??!?!  I tried to remember names Russ threw out the night before, but they kept getting picked up.

And this ended up being my team in the other dimension…

Okay. Okay. It’s not that bad.  Until I got this email from CBSSports.com

The Matt Millen Award Goes To...
Coach Eric Bolton might want to ask Coach Jeff Ebeier for some help next year, as their starting squad is ranked dead last in expected points. Coach Bolton reached for several players, including the Bengals defense/ST, the Bears defense/ST, and Matthew Stafford. Stafford rated as the worst pick in the draft, taken 69 spots ahead of what his projections suggest.

I don’t even know who the heck Matt Millen is!!!

Oh, CBSSports.com, you know me so well.

Well there you have it. One side it should be fun, the other side is should be sad.