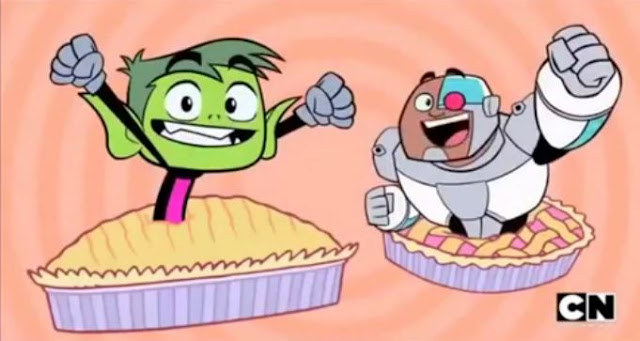 So the kids found the show, TEEN TITANS, GO! on Cartoon Network.  For those of you who don't watch (or have kids who watch), it's based on the DC Comic characters of the same name.  The kids really enjoy it because it's a fun show.  The few episodes I've seen, its apparent the show doesn't take itself seriously.  Instead of saving the world issues, the show focuses more on the time between the major crisis events.
Michael would watch it's predecessor, TEEN TITANS, when he was younger.  When he sat down to watch an episode of TEEN TITANS, GO! with his sibs, he immediately hated it because it wasn't a continuation of what we watched.
He hated the lack of action sequences which have been replaced by random singing by the main characters.
Such as this one right here...

Yes.  A song about the love of pie.
I think it's brilliant.
In my search for the above pie song, I found this one below too.  It's the same song, you hopefully just watched, REPEATED FOR AN HOUR!!

Yes.  A song about the love of pie, REPEATED FOR AN HOUR!!
The kids got six minutes into and and still enjoyed it when I made them turn it off.  Not because I was sick of it or anything, but because I had the idea to make a blog post about it.  They probably would have made it to sixty minutes if I let them.
So I decided if you were going to listen to the song, I might as well reward you for it. I have unopened Green Lantern swag left over from the movie giveaway a couple years ago.  Anyone who likes Welcome to Boltonshire on Facebook and watches the hour long video is eligible to get a copy of GREEN LANTERN ORIGINS.
The watching the video is completely on the honor system.  If you don't watch the video and say you do, I have no way to verify.  It's on you to be truthful here.  If you want a copy of one and you don't win, just ask,  I have like three copies.  So there's no reason to lie about watching it for the entries.
So enter away and..
Welcome to Boltonshire.
a Rafflecopter giveaway
blog giveaway comic book Green Lantern green lantern origins i love pie pie bros robin teen titans teen titans go