The Welcome to Boltonshire Saga [Part 3]

Posted by ericdbolton on June 05, 2013
This week I am featuring the Welcome to Boltonshire pulp comic adaptation.  Part 1 deals with my oldest son, Michael, and the onslaught of siblings he's obtained since ﻿his mother and I married.
Part 2 was about Loreli and her leading the Rangers of Power [cough Power Rangers cough cough] of which mirrors her real career aspirations.
The third part of five focuses on Seth, my youngest son. 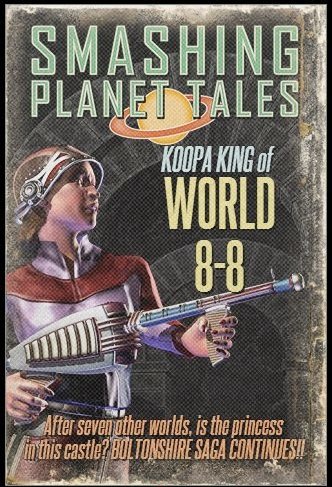 SMASHING PLANET TALES
Story Arc:  The Welcome to Boltonshire Saga
Issue Title: King Koopa of World 8-8
PREVIEW
A distress call from a princess known only as "Peach" is intercepted by Seth Daniel.  She's been captured by the King of Koopas.  Seth Daniel follows clues through seven different worlds with seven different hostile enviornments only to be tricked by a clone doppleganger in each castle.  His mission takes him to the planet known only as "World 8" in hopes that his princess is in this castle and defeat the evil King of Koopas.
Welcome to Boltonshire.﻿
comic books not a real comic book pulp comics pulp-o-mizer smashing planet tales super mario bros welcome to boltonshire