Extortion (written and directed by Phil Volken) stars Eion Bailey as Dr. Kevin Riley.  Kevin wants to give his family (wife Julie played by Bethany Joy Lenz and son Andy played by Mauricio Alemany) the best family vacation in the Caribbean he can arrange.  Yet things go wrong when Kevin keeps making bad decisions. The first being renting a boat to charter from a local who is pretty lax on paperwork. With a seven second training program, Kevin takes the boat out and goes out a three hour tour (literally, it was supposed to be a three hour tour).  Andy gets all exciting when he sees an island and wants to know if there’s treasure.  Mom is hesitant at first, but succumbs to peer pressure and lets the boys go to the deserted island. They spend some time there, but when they try to leave the boat won’t start and they’re stranded with no food or water.

I say this part is the mom’s fault.  Dad was responsible for securing the transportation, mom should have been packing the orange slices and juice boxes.

They’re stuck on the island for a couple of days when a fisherman (played by Oscar Nominated Karkhad Abdi) finds the family and offers a chance for rescue.

Finding out that Kevin is a doctor and therefore rich, the whole extortion part of the movie starts.  Kevin is forced to scrape money together to save his family, and when that doesn’t work ends up having to take it upon himself to find which island his family is trapped on.  The local police, lead by Constable Haagen (Danny Glover), aren’t much help.  They have good intentions on wanting to help Kevin, but he won’t sit idly by and let his family die of dehydration.

Abdi’s Fisherman isn’t a normal thug of a bad guy.  His character has his own issues and sees the stranded tourists as a way to help him out of his problems.

Extortion makes you think it will be your typical Taken-esque type movie, but with a couple surprising twists in the second and third act the movie doesn’t come off as too predictable.  It is a slow burn of a movie with the action and pacing picking up when the fisherman is taking Kevin back to get his family. 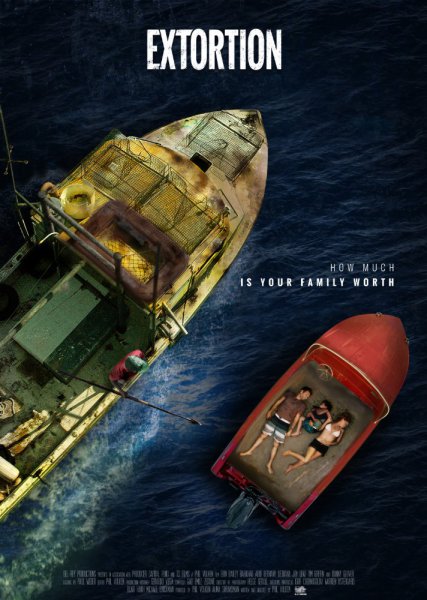 This thriller will be available on VOD/Digital/DVD across all platforms beginning May 16th through Lionsgate.

On my movie grading scale - I give Extortion: