Posted by ericdbolton on June 26, 2013
I participated in a campaign on behalf of Mom Central Consulting for Delta Faucets. I received a product sample and promotional item as a thank you for participating.

I don’t think I've ever been described as a “handyman”.   I have been described as “broke” though.  When you’re broke and there’s things in your house that need to be fixed, you have to find a way to take care of it.  You either find a friend or family member who knows what to do, or you do it yourself.
This not-so-handy man has managed to fix a washer, a dryer, install a dishwasher and garbage disposal.  I've patched my roof when it was leaking, and fixed the outside A/C unit when the compressor went out.  I've replaced brakes and belts and different parts of various cars all because it needs to be done and I don’t want to pay someone a bunch of money to someone to do it.
One thing I've never attempted to fix was a broken toilet.  Sure I’ve replaced the handle.  That’s simple.  It’s when something major happens, I just don’t feel comfortable touching it.
It’s not that I could be covered in pee and crap if I don’t do it correctly.  Heck, I’m a dad, I've gotten that for seven years.  It’s just one of those things if you screw it up, you’re screwed.  I can suck it up and be hot if the A/C is out.  I can wash dishes by hand or go to the laundry mat if one of those appliances are messed up.  But if we have no toilet?!? 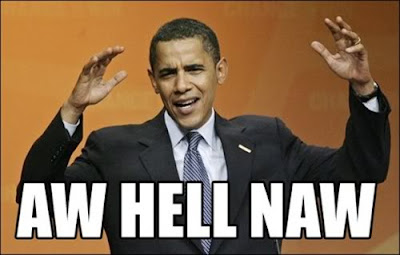 Like when gravity took a toilet paper rod and dropped it in the toilet. (If you haven’t seen the video, go watch it!!)  I had no idea where to start or what to do.  Mainly, I just didn't want to mess up the toilet and make my wife and kids have to go to the corner store to do their business.
So we got my father-in-law to fix it.
He’s a plumber anyways.
And we pay him in grand kids.
Well, I was approached by Delta Faucet to help out promoting a toilet that is supposedly easy to install.  Like a fool, I said sure,  I’ll try it out.
So they sent the giant box and it sat in our living room for a few days.  I wanted to delay the inevitable for as long as I could.  My mother in law kept offering up the services of my father in law and we kept telling her that I need to do this.
But we will have his number on standby in case anything happens.
I opened the box and pulled out the instructions .  I was impressed with the basic directions with only eight steps.  Even the positive impression I had of it so far did not help my anxiety.  I  dare not start the install during the day.  The kids can go for hours without using the bathroom.  Yet only when there is no bathroom available is when they really need to go.  Plus I had a pregnant wife and I knew even if I waited for her to go to the restroom and started the second she flushed, I’d only have at the most sixteen minutes to complete it.
So I had to wait until the kids were in bed before I began.  I also made sure it was right after Kristie went to the restroom.  There were no more excuses and no more time to delay, so I started at 9:20 PM. 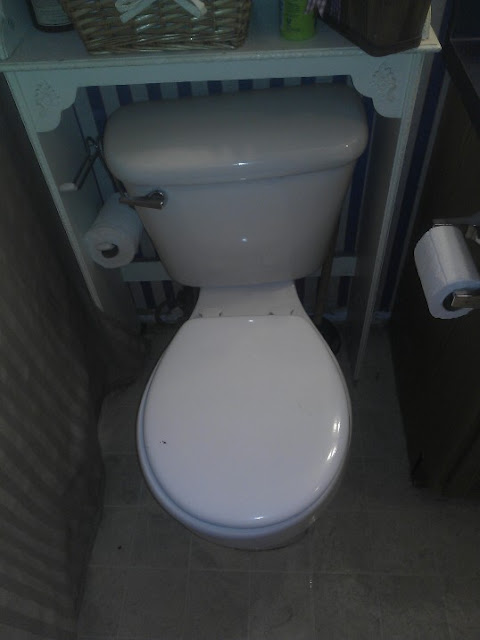 Here’s our old toilet.  It’s rather new, we [my father in law] replaced it last year.  The shelf is there for storage since we have a smaller bathroom. 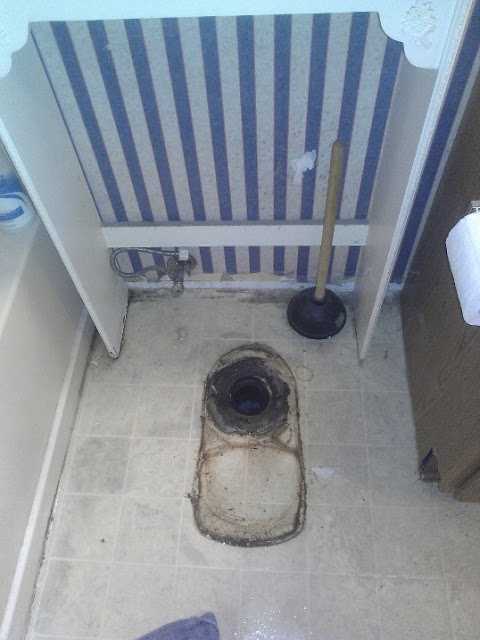 It only took me about 15 minutes to empty the toilet and remove it from the room.  That’s a hole where our poop goes down.  This will be the first time my wife has seen this and say that it’s disgusting. 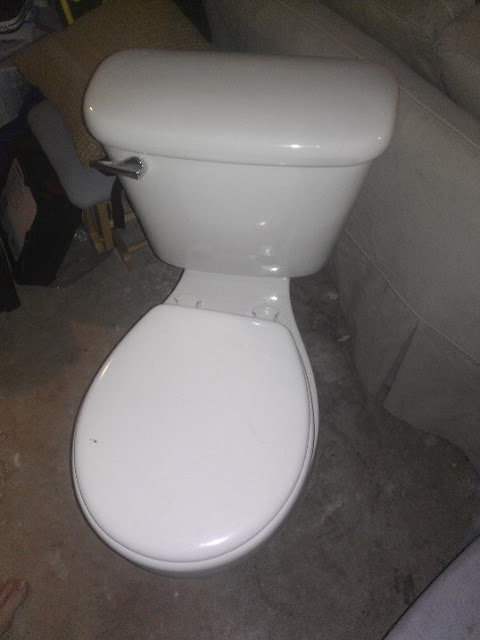 There’s the toilet in the living room.  My only concern was one of the kids would not understand there needs to be a hole in the ground for their poop and use the toilet. 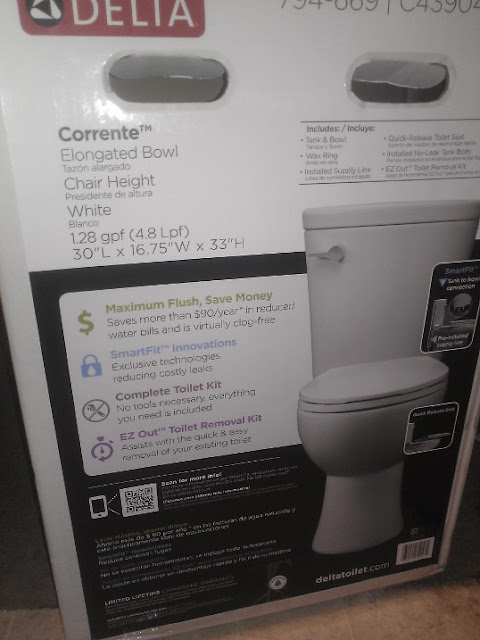 Here’s the box.  The box promises MAXIMUM FLUSH!!! To save about $90.00 a year.  That’s about a quarter a day if you break it down.  Not sure if that really should be a reason to get it.  It states Smart Fit Innovations.  Honestly, I did not check out everything in the tank, so I can only assume it’s a good thing.  Complete Toilet Kit.  This part was nice it did have everything I needed to install.   EZ Out Toilet Removal Kit, yeah I found this after the fact.  I had no idea there was a kit when I started my project.
Reading.  I ain’t got time for that!!! 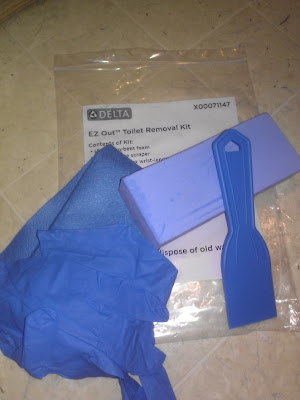 This is the EZ Out Toilet Removal Kit.  It consisted of a scraper, a sponge, cloth, gloves and plastic bag for the removal of the old wax ring.
Actually, the box didn't have everything needed to install the toilet.  The instructions called for the use of silicone on the bottom of the new toilet.  I did have to run to Home Depot to pick up a tube (actually knew about it earlier in the day and got it then).  I only used a small amount and now I have this tube of silicon I'm probably never going to use again. 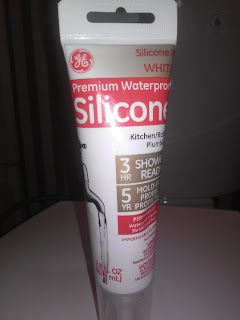 If anyone wants to borrow some, just hit me up.  It would also be nice if they provided a small tube with enough silicone to do the job.  I'm sure there's some reason it doesn't.

Here's a picture of the multi-tool thing.  Here in San Antonio, we call it a chingaderra. 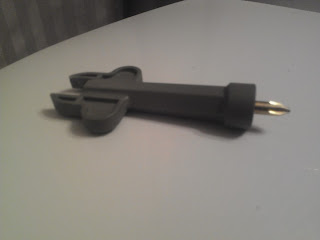 And here's the finished product... 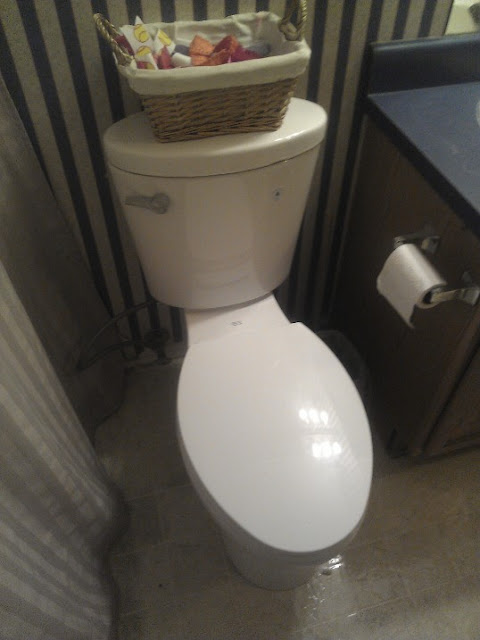 Notice the shelf is missing.  Well that's because the tank was too tall to fit underneath.  I had to remove it from the wall to be moved to our other bathroom eventually.

After an hour and a half, I was finished at 10:50 PM.  What took longest was trying to remove all the old wax ring from the flange and showing the kids how the toilet mechanics worked.  If I could do it again, I would think I could have it done in 45 minutes of less.

We like the toilet, we appreciate the elongated seat.

The smaller seat had no room to drop toilet paper rods down.

Here's what I left on the Home Depot and Delta Faucets Website about the product...

"When I got the toilet, I was unsure if I was going to be able to really install it myself. They promote the easy to install features of the product, but I still had my doubts. The box contains a kit to help you remove your old toilet and clean up afterwards. It has all the supplies you need to install the product, but does not have the silicone it suggests to use on the base of the commode. But everything it was very easy to install and I didn't break anything or say, "that'll do". We've been using it for over a week and the whole family likes it. I would totally recommend this for the never done this before do it yourselfer"