The baby is coming in seven months or so.  Since we're still early on in the pregnancy, we're being asked if we want a boy or girl or if we thought of any names yet.  We've tossed some names back and forth, but it's really early on to decide anything.
My first opportunity for naming a new human was with Loreli.  Kristie had gotten the name "Loreli" from the TV Show "Gilmore Girls" and the main character of Lorelei Gilmore.
What a lot of people don't know is Loreli's real middle name on her birth certificate is in fact "Gilmore" and not "Miah".
My wife REALLY loved the show.
Secretly I knew she wanted our Loreli to be a lot like TV's Lorelei.  By "be a lot like" I mean, for her to grow up move to small town Connecticut  find a nice guy named "Luke".  Guys named "Luke" are cool, and open an Inn.  All while immersed in quick sarcastic / but funny dialog.
Now it's my turn to throw in my suggestions for naming our next new human based off shows  that I really love / loved.  Unlike my wife, these are no secret.  I openly hope my kid turns out like these suggestions.
Oh by the way, these are all boys names.  I don't know any female characters since I don't watch Lifetime.
Top Five Suggestions for baby names based on my favorite TV Shows 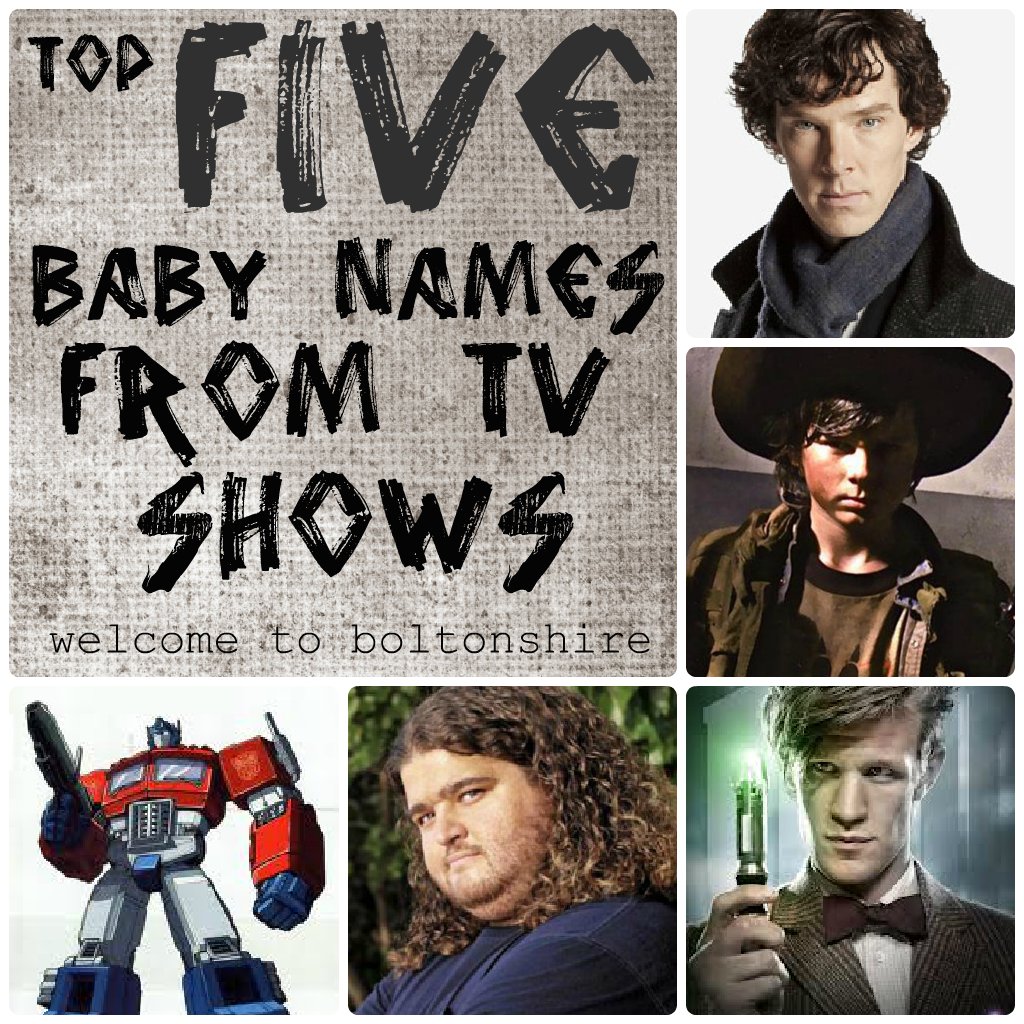 5 - Hurley [From LOST] - I know what you're thinking, "Hurley?!?  Why Hurley??"  If you watched LOST, name me a character you couldn't wait to see die.  Go ahead name them.  "Shannon" "Ben" "Ana Lucia" "Crazy Claire" you can name all the characters just to name them and to make me think you're going to say Hurley eventually but you can never say Hurley!!!  Hurley was the nicest guy on the island.  He was a friend to everyone.  The cool good looking people liked him and even the not so cool, not so good looking, more than likely going to die in the season finale people liked him too.  If you say you didn't like Hurley then you're probably the Smoke Monster and should have yourself checked.

4 - Optimus [From Transformers Cartoon] - "You want to name your kid 'Optimus'?  He's destined to get made fun of."  Yes he'll get made fun of… Once.  Because the first kid that says to him "Hey I see you transformed into a DORK" is going to get his face transformed into pile of dog poop.  Yes I'm threatening a possible kid in my imagination.

3 - Sherlock [From Sherlock] - Naming your kid Sherlock in hopes he becomes the worlds greatest detective would be awesome.  It would just suck at Christmas times when he figures out what we got him before we even purchased it.

2 - Carl - [From Walking Dead] - They're in the news, they're everywhere.  Zombies are going to rise up and start killing everyone.  Honest.  While Carl wouldn't stay in the dang house in Season 2, he is a Hardcore Zombie Killa in Season 3.  He doesn't miss.  He looks out for his crew.  You can count on his forced upon maturity, and I totally need someone to take me out if I ever get bit and turn.  My wife and the other kids wouldn't be able to do it.

1 - The Doctor - [From Doctor Who] - For those of you who do not watch Doctor Who on BBCA or Netflix, YOU'RE WRONG!  The show is better than LOST, Prison Break, Mad Men, How I Met Your Mother, Downton Abbey, Sesame Street, The Price is Right, 20/20, Rachel Ray,  Law and Order:SVU and even Phineas and Ferb.  The Doctor is brilliant, resourceful, silly, caring, bold, not a ginger, and saves the day, every day.  He's probably saved the day twice already just today.  That's the thing with The Doctor, you aren't even aware you're in trouble and he's saving you.  He wants no credit, maybe just some Jammy Dodgers.  That's the way my The Doctor is going to be, just without a British Accent.   The Time Travel is just a bonus.
I even made him his own TARDIS Stroller until he is old enough to pilot a real one.. And like Kristie and I have told his siblings…
No companions until he's sixteen.