Posted by ericdbolton on September 06, 2012
I went to Texas A&M University.  I am an Aggie.  The plan is for the children to be Aggies too.  When Michael was growing up, he wanted to go to Texas A&M.  He would get the Aggie paraphernalia and we'd watch the games.  One weekend (about five years ago) while he was at his dad's, we painted his room. 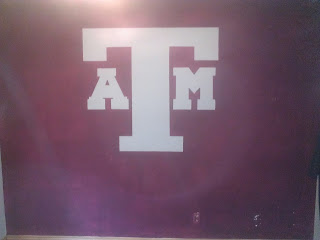 He'd fall asleep every nigh with the mighty Aggie Logo watching over him.
But for some reason, he went to the University of Texas (t.u.).  I can only believe it was because once he got into his later teenage years, he rebelled against what his parents liked.
This past weekend, we moved Seth and Loreli into Michael's old room.  Even though I love the work we did on the wall,  I don't want this rebellion to happen again.
So I'm trying for some reverse indoctrination.

Hopefully, they're so sick of their room when they get older they'll choose Texas A&M.  I will sacrifice dry heaving every time I have to go in there.
Welcome to Boltonshire
aggie wall i am trying to indoctrinate my kids i went to texas a and m but my son went to texas longhorn wall