Posted by ericdbolton on May 21, 2012
Pop Quiz Hot Shot!  You have a new born baby, babies like to poop.  Their legs are so stinkin' strong, it's like they were training to be technical wrestlers in the womb. They're squirming and moving and the crap generic store brand diapers your "friend" at work gave you just can't  keep everything in. What do you do? WHAT DO YOU DO?!?!?!
The answer is not to shoot the hostage.
The answer is to use Huggies Snug & Dry Diapers.  Huggies [ Facebook / Twitter ] has made improvements to their Snug & Dry Diapers (because you can never be to snug and / or dry).  Poop and pee stay in a lot better than before (while I didn't have that much of a problem before, because I would change their diapers). But it  does come in handy when Grandpa Dan is watching the kids and he doesn't "get around" to changing their diapers before we get home, because they're on his bed watching Netflix, eating cotton candy, and drinking soda.
Another Pop Quiz Hot Shot!  Grandpa Dan has just given your newborn baby cotton candy and soda.  They're pooping like the Jericho Missle System presentation in Iron Man (it's gross because it's true). Poop is everywhere.  What do you do?  WHAT DO YOU DO?!?!?!
The answer is not to shoot Grandpa Dan.
The answer is to use Huggies Wipes to clean all that baby poop up.  While I've noticed nothing different in the wipes given to me as a sample, I've always enjoyed Huggies Wipes better than others, mainly because the wipes are folded in a way the next one pops up when you pull the top one through the wipes box hole.  Not like those generic store bought ones your "friend" at work bought with their stupid diapers.  Those wipes are just laid on top of one another and they don't pop up when you get the top one thru.  So you have to reach in the box for another, but you have to hurry because the Jericho Missle System from Iron Man is about to reload.
Yet Another Pop Quiz Hot Shot!  Do you pronouce it "wipes" or "wipe-eese"?
If you said "wipes", you're wrong!!!!  It's "wipe-eese".
Last Pop Quiz Hot Shot!  You've got your newborn and you're hanging out with your friend from work and he's attacked by a zombie and bitten.  The zombie won't let him go.  You have your gun ready to go.  What do you do?  WHAT DO YOU DO?!?!
The answer is to shoot the hostage.  One because he's already been infected and he's as good as dead anyways.   And two because he bought you those crap generic store bought diapers and wipe-eese and not only is there a zombie attacking, you're now covered in newborn poop. 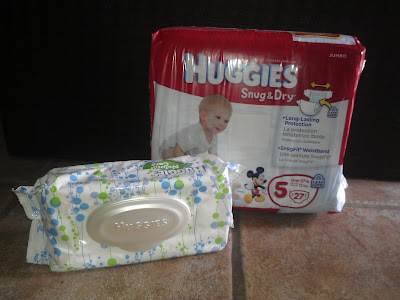 I participated in a campaign on behalf of MomCentral for Huggies. I received product samples to facilitate my review and a promotional item to thank me for participating
huggies snug and dry huggies wipes poop