Posted by ericdbolton on September 27, 2011
Week three of the Fantasy Football season is over.


This week the third ranked (in their division) Maximos took on division leaders Team Pace.

Ugh.  Another I don't have time to come up with a catchy' hey I'm funny douchey name' team!

You know, I should really watch what I say because these guys are going to be at my brother's  (The Thunder Dumplings) wedding this weekend.  Then again, I'm delusional if I think anyone other than my wife, mother and mother-in-law actually read this blog.  So I can pretty much talk as much crap as I want to.

Well the Maximos were the underdogs going in.  I could tell you the reason, but I have no clue who is on my team let along the opposing team.  So me telling you why some other team is better than mine would make me look idiotic.  I'm so short sighted when it comes to managing, I don't even look to see who I'm playing the following week.  I base it all off of who screwed up the week prior, I get all Frank Castle AND I PUNISH THEM!!! 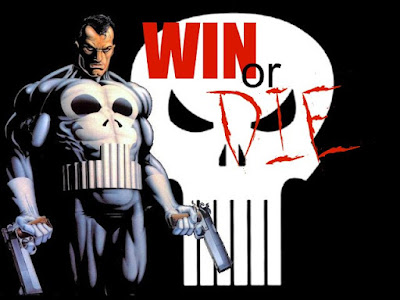 Just ask the wife of my former kicker Nate Kaeting.  He lost his leg in a Michael Vick dog fight and I dropped him like phat beat.  I'm not all about, "Let's go team!  You guys do great no matter what the score is", "We didn't lose, we ran out of time!!"

Threatened terroristic style punishment is the excellent coaching skills I showed this weekend.  El Supremo Maximos were projected to lose to Team Pace, but guess what!

El Supremo Maximos pulled the upset and won by a score of 107 to 74.

Now this win is very important for the Maximos.

From my initial FF Post.
- I will win two of the first four games and then go on a eight game losing streak.


With my two wins out of the way, it is nothing but DOWNHILL from here.  My team is like the Houston Texans of Fantasy Football.


I will be making no changes since I've done okay the past two games and no one has a bye just yet.


How did your teams do?


Have a great day my friends.