Posted by ericdbolton on August 29, 2011
The fine folks over at Mom Central tapped me to partake in a series of posts in regards to the Brother P-Touch label maker.  Mom Central's first request is that we put the durability of the labels to a test.

I'm assuming Mom Central knows about the residents of Boltonshire and how vacation beach houses have been devastated in our wake.  I asked them if they knew the power of the Fatal Five.  They acknowledged and almost taunted a throw down between the two parties.

I'm a professional wrestling fan.  So I only thought it be fitting if I took the challenger, the P-Touch Label affixed to a piece of plexi-glass and ran it through the DURABILITY GAUNTLET OF DOOOOOOOOOOOM!!!

The DURABILITY GAUNTLET OF DOOOOOOOOOOOM consists of a scrub brush, a sponge, nail polish remover and clorox detergent.  All items were provided by Brother for testing. 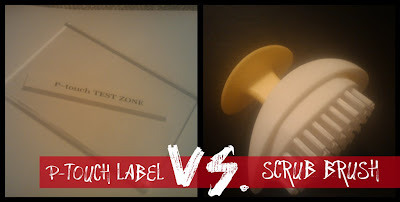 The dry scrub brush attacked the label in such a way as to pick the corners from the glass.  In hopes a corner could be exposed and the advantage taken on the weakened side. After a few minutes and the development of carpel-tunnel syndrome.  The scrub brush gave up and threw in the towel. 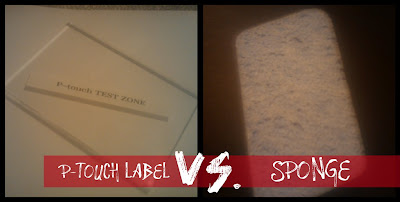 After seeing how ineffective Scrub Brush was against the label, the dry Sponge tried the same attack with the same results. 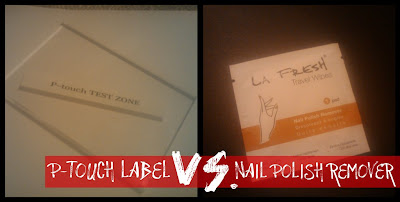 Since a technical attack was not very productive.  La Fresh Travel Wipe Nail Polish Remover tried to attack the actual ink on the label.    The wiping was intense, but it was to no avail.  There was not even a smear of the ink.  The Wipe took herself out of contention with no hope of a comeback. Sponge decided to try his hat with Label again, but this time brought his friend Mr. Clorox.  Clorox sprinkled himself over the label first dry then scrub brush joined in the fight as well.  Still unable to make any dent in Label's defense, they threw some water over Detergent in hopes of more damage.
Nothing.  Sponge gave up and called for Scrub Brush to try and finish the job.
ROUND 5 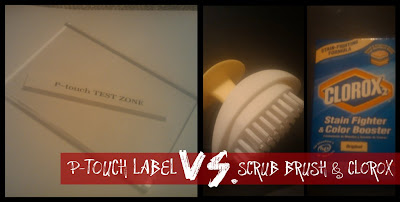 Scrub Brush tried to take over on the wet detergent where Sponge left off.  Still suffering from the onset of Carpal Tunnel, Scrub Brush was wise to give up and convince Clorox to do the same.  Label could not be stopped. 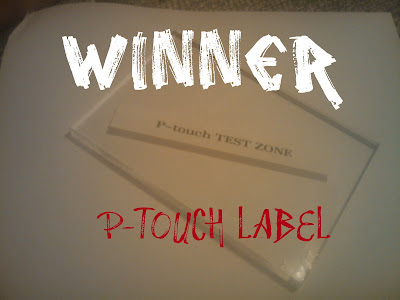 So with the items in the P-Touch Test Pack, none of the items were able to take down P-Touch Label.  I might go as far and coin the pun, "P-Touch is P-Tough".
So when you use the labels from the Brother P-Touch Label Maker, you can rest assured the labels, once affixed will not come off from basic household chemical items or cleaning utensils.  So you can post your labels in high traffic areas and feel safe they will not come off or smeared.
Now, I'm also a fan of MythBusters.  You know, the show they try to recreate a scenario to see if something is a myth, plausible or confirmed true.  At the end of the shows when something is confirmed true and it's confirmed with explosions, they like to go all out and just BLOW THE CRAP OUT OF IT ANYWAYS!!!!
So with that in mind... I called in some friends or mine to go against P-Touch Label in a non-sanctioned Mom Central/Brother test. 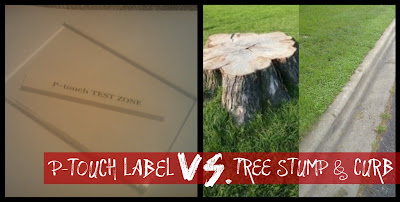 Again, this is non-sanctioned and obviously not in the realistic intended environment to use a P-Touch Label Maker.    It's just my dark desire to BLOW THE CRAP OUT OF IT ANYWAYS!!!
I take no credit if my kids develop this same desire. 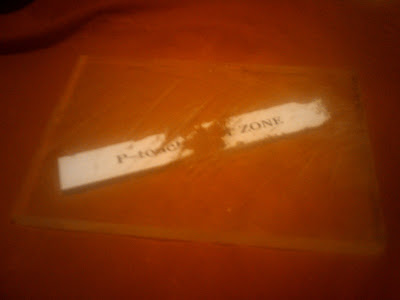