Because I haven't  talked about comics enough on this blog recently, I'm changing it up here.  This Saturday, May 7th, anyone can walk into a participating comic book store and DEMAND free comics.  Well you don't have to demand par se, you can just go in there and ask.  They'll be happy to give it to you.
So if you're thinking about going around stealing comic books this weekend, DON'T DO IT!!!  They're free.
Now they're NOT ALL free.  Just the ones dedicated to this year's Free Comic Book Day event.  Usually some of the comics help promote upcoming summer movies.  This year I was expecting Thor, Green Lantern, Captain America, X-Men, Transformers and even Pirates of the Caribbean. All to correspond with their respective movies.  Now while according to the Free Comic Book Day Website, not all those titles will be represented.
There's a Green Lantern, but it's a partial reprint from the one I'm giving away. (Hurry the giveaway ends today) Which I guess is cool to the n00bs (who they want to bring in), but since I already have it, I'm somewhat disappointed.
But that doesn't mean you won't be.
I was hoping for sure they'd have at least two comics from Marvel about their obvious blockbusters this summer.  Well, they're combining Thor and Captain America into one comic.  From the cover it looks like they're in the middle of WWII.  I'm not sure if this will be two stories with each character or a team-up story where the Cap punches Hitler in the face then Thor smashes his hammer into it right after.
But that's it for this summer's movie tie-ins.  That doesn't mean that's all the comics they will have.

Now if you're not all super hero geek and you think maybe they're too violent for your kids, they also have comics based on cartoon characters.


And then there'a also the educational. 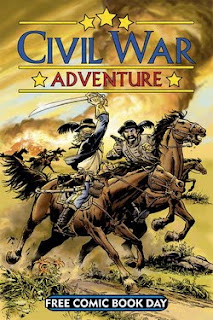 So whatever your style (even if you're not a comic collector), there's something out there for you.  Just check out the official website of Free Comic Book Day for locations near you and comics available.

Last year was our first year participating and while my wife was concerned about the hygiene of the Magic:The Gathering players, everyone enjoyed the little activity. This year, KC and Ladybug will not be going.  KC is trying to lure her away from the geek side by taking her to a mother/daughter banquet.  This also happens to be our weekend with MaddSkillz, so he'll be joining us this year.

Since I'll be flying solo with the kids, I had to map out my plan of attack (like I did in New York).  Most stores only allow 2 books per person.  So the plan is to hit multiple store.  We'll unload, run in, get what we need and run out just like Seal Team Six.  We plan to start hitting them after we drop off KC and Ladybug off at my Father-In-Laws in the morning, then make our way back towards our house.


I'll use D as a person who wants two books and I'll "hold onto" hers.  The Emsters can also get a couple which I'll more than likely use for the missing Ladybug.
So if you want something to do and you like free stuff, go to their website to get a list of location in your area.  Just be warned of the guys playing Magic:The Gathering and their hygiene.

TODAY IS THE LAST DAY FOR THIS GIVEAWAY