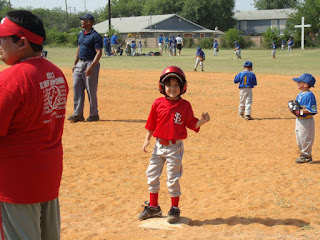 Ladybug kicked off her sophomore season of T-Ball with our local CYO yesterday.  It was a rough start with practices and logistics because there seems to be no organization with this league what so ever.  First we were never sent any information when registration started.  I called one day to get dates, and they told me the upcoming Thursday was the last day.
Apparently since we didn't play basketball with the league, we weren't privy to any information.
We've had to deal with last minute uniform fittings and pick ups.  Both which caused rescheduling activities in order for Ladybug to have a uniform that actually fit.  Then there was the issue of not having a set game schedule until this past Thursday.
Then on Friday it changes again.
I deal with the baseball stuff because KC would get all west side and probably have to cut someone if she had to deal with the lack of organization.
The Emsters was sick all weekend, so KC stayed home with her and D.  I took the Triad in 90+ degree heat with no shade or wind, and no parking because they schedule the games 15 minutes after mass.  So it's a good thing KC stayed home, she would have definitely had to cut someone.
My dad, little sister, and KC's father joined us for the game to witness what you would expect from a bunch of four and five years olds being told to focus on one thing for sixty minutes.  Some of the more memorable parts were kids running to first base holding their bat; the batter pretty much figuring they were going to ground out at first base so they run across the field straight to second; and then the obligatory kid filling his cap with sand to then placing it on his head.
The best or course was the runner who refused to accept he was tagged out and continued to run towards home.  This caused the third baseman to follow him with the ball and tag him continuously to get it across he was really and truly out.  This allowed another base runner to actually run behind the fielder chasing his team mate to piggy back and get a run scored.  It was brilliant.  I'm suprised it doesn't happen more in the big leagues.
My daughter of course does not partake in any of those shenanigans.  Her attention span grows immensely when it's not something her parents need her to do.
I honestly did not get to watch much of the game because Disco is in the midst of potty training and even though we go before we leave, he had to go potty TWICE in an hour.  Add that to the fact Celi did not want to stay with her grandfathers, I had to have her in tow as well.  Then with the two of them being hungry after all that walking to the bathrooms, I made the trip to the snack bar to stand in line for a while.  It resulted me in seeing about 10 minutes of actual game time.
Next time I'm sneaking in food and keeping Disco in diapers.
I did however get to see my little girl make some pretty good plays from short stop and excelling while at bat.
Yes, Ladybug hit a HOME RUN!  Now if you're asking if all the practicing on Wii Sports helped out on this.  I want to say yes, yes it has.  It also had to do with the outfields fighting over who is going to pick up the ball and throw it.  She got 2 RBI's for her awesomeness.
Her next time up to bat, she got a single and made it home again.  The team ended up winning 12 - 0.
In case you missed the hit.  Here it is again as an animated gif...
Have a great week my friends.
baseball home run T BALL