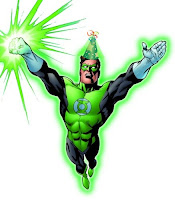 In celebration of the upcoming Green Lantern movie from Warner Bros, Mom Select and Mattel shipped me a box load of Green Lantern swag for review and to give away.

Just to get this out of the way, prizes are only available for those of you living in the Continental United States.  Sorry, this is my own dime when mailing these out.  You're still welcome to play, but it won't get you anything.


So hows this going to work, Eric?

Are we all good? 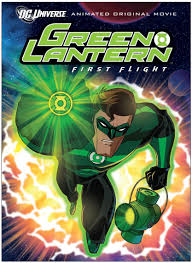 Anytime a super hero's origin is told in a different medium, some changes are retconned to update for the current audience.  It pisses off some hardcore comic book geeks who don't appreciate the changes made to an already perfect character.  Green Lantern First Flight DVD stays pretty close to the comic origin with some modern tweeks.  The story follows Hal Jordon's (voiced by Christopher Meloni) acceptance of the mantel from a dying  Green Lantern Abin Sur and his training on the planet Oa under the guidance of Sinestro (voiced by Victor Garber). A bunch of stuff happens that I won't spoil for you, but it's an intense cartoon.  Pretty much the reason it's rated PG-13.  Other voice stars are John Larroquette, Tricia Helfer, and Michael Madsen.

Green Lantern Battle Shifters is one of the toys becoming available in promotion with the upcoming movie.  They have a Transformer feel to them because the weapon constructs have two forms.  One is a more defensive mode and the other can be pretty offensive. Not like offensive like it will start calling out racial slurs or anything like that, but offensive in  the ability to attack.  They are recommended for ages 4+.

QUESTION:  Ryan Reynolds has given his likeness to the development of the action figures based on the movie.  But what if it wasn't Ryan Reynolds who got the part of Hal Jordon / Green Lantern?  Of those actors also considered for the part shown below, which actor would you have chosen to  represent your Green Lantern Battle Shifters? I talked about the Colossal Cannon in my review of it last week.  I still stand by the idea, I will only allow three disks chambered during playtime.  Ten disks are cool and all, but if you're trying to strafe your little sister while she's running for cover in the back yard, you're bound to lose some.  The idea of the Green Lantern Colossal Cannon is that is a construct from the Green Lantern power ring.  It's pretty much a Gatling cannon on your wrist (do you notice the fist and ring?).  It's fun to play with, it isn't going to kill anyone if they get shot with it.  So kids can be kids and parents won't have to worry about major injuries.  Just be mindful of the disks if you have little babies who like to put things in their mouth.  For ages 5+.

QUESTION: The Green Lantern power ring has the power to form (construct) any type of weapon the wielder can imagine.  If you had the power of the ring, what would you construct?

Secret Origin: Green Lantern is a collection of Green Lantern comics in hard copy form (with dust jacket) that retells the origin of Hal Jordan obtaining the Green Lantern ring.  They honestly have to do this every decade or so to keep the origin from being too dated.  It's neat in the effect it shows characters that didn't show up until later in the main character's life in flashbacks.  I'm thinking this is what the movie is going to be based off of.  It contains a history of Daddy Issues and wanting to live up to his dad's legacy, etc.   I didn't collect a lot of Green Lantern comics while growing up (I was mainly a Marvel kid), but this collection is a pretty solid story.
There is also a forward by Ryan Reynolds.
QUESTION:  I'm thinking in the movie there are going to be cameo easter eggs of the other Green Lanterns from earth, like  the four below. 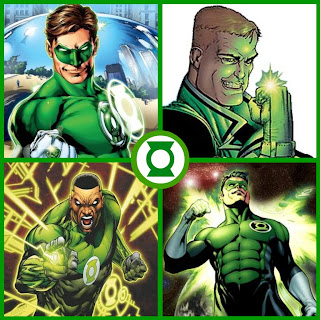 (From top left clockwise) Hal Jordon, Guy Gardner A.K.A the douche lantern, John Stewart, and Kyle Rayner.  In an issue of Justice League back in the 80s, Guy get's knocked out by one of his team mates.