Posted by ericdbolton on March 02, 2011
One thing that is repeated over and over again in this house is the phrase, "Stop throwing [that thing]!!!"

Because they listen to us intently, they usually stop the first time.

Disco is the worst, he would just pick up random things and throw them in any direction he sees fit.  When I had my laptop at the kitchen desk, I usually had something to drink next to my computer.  On two separate occasions, he threw something and it hit the drink directly and spilled on my keyboard.  He wasn't aiming for anything, he just has this medical condition where he has to throw something.

I really don't know who  the culprit was who threw a stuffed animal, hitting the ceiling fan cord which caused it to hit a bulb on the fan and send  a giant shard of glass to the floor below.

We've told them and we TOLD them.  We've explained that something could happen if they kept throwing these things.  The main thing that could happen would result in them being  thrown themselves.

So the other night, KC was out with MaddSkillz and I was taking care of the kids for their evening activities.  I had the D, the Emsters, Celi and Disco bathed.  Ladybug was in the shower and I was feeding D.  Disco was playing in his room when he came out telling me to come look at Celi's kitty.

"Celi's kitty" is her stuffed Hello Kitty.  We had gotten it for her so she could have a distraction from her pacifier.  We'd give her the kitty every time she asked for her pacifier.  Within three days she wasn't asking for the paci anymore.  She's also tucked into bed with Celi every night.


I figured it was on Ladybug's bed and I told him I'd get it in a minute since I was taking care of D.  A couple minutes went by and he requested me to come get the kitty.  I told him to hold on because my new concern was Ladybug's over 20 minute shower.  I tell her to hurry up and then I smelled something.  I go see Disco and he points to the lamp in their room.

Kitty was resting in the floor lamp shade on a glowing light bulb.

I quickly removed kitty from the lamp and made sure nothing was on fire.  Disco saw kitty and started crying. 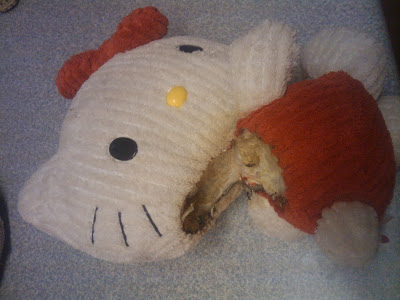 Kitty was dead.  And if she wasn't dead, she wasn't very happy with her current situation.

I wasn't mad and I didn't scream at him.  Yelling that he could have start a fire would have accomplished nothing.  So I calmly took his hands and told him it was okay.  I explained to him this is the reason why we don't throw things.  It didn't make him feel better though.  He was very upset he ruined his sister's kitty.  He went to tell his sister he was sorry.  She said "It's okay."

Honestly she had no idea what had happened, she just wanted him out of her way of Yo Gabba Gabba.  She seemed sad a couple days later when she realized that kitty was "broke".

Kitty will probably not be thrown away.  She'll end up in a box of things they loved  which will probably be joined by Ladybug's Heartbear and Disco's blanket in the coming years.

So this post is dedicated to you "Celi's Kitty".  You didn't last long, but you got the job done.