Posted by ericdbolton on December 07, 2010
Have you ever received a unscheduled visit from Santa Claus when you were a kid?  I did sometimes.  Having divorced parents, Christmas was always a hectic time (as it still is now with MaddSkillz).  Both my parents wanted to have "Santa Time" with us, so Santa would come on mornings that weren't always December 25th.
As kids, my brother and I didn't think the wiser.  We felt special Santa made a return trip for us.
Then there were times when even if we had both "Santa Times" with both parents, Santa would again make unscheduled visits (usually with my dad and step mom).  It was usually accompanied by a letter like the one below. 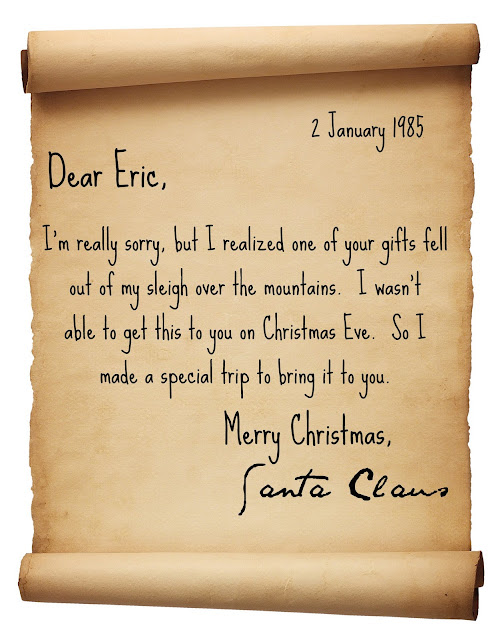 When I was a kid, I totally believed it.  I mean, Santa wouldn't have forgotten it on purpose.  And since Santa was real and my parents could not at all actually write a letter and sign it "Santa Claus".
But then I had kids and I became Santa.  That's when I realized what actually happened.  Santa didn't "drop" my gifts, he just didn't get paid in time.
Christmas more than likely fell between pay periods.
This year I get paid on Christmas Eve-Eve.  I'm off on Christmas Eve, but I really don't want to deal with the last minute people.  So I decided I'd write my own letter to the kids.
It might go something like this... 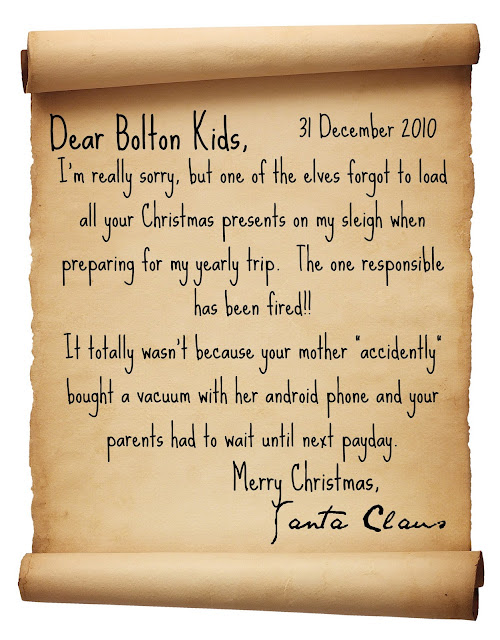