Posted by ericdbolton on December 10, 2010
After watching the Christmas Special of Phineas and Ferb for about eleventy-billion times, the kids had the idea to write letters to Santa Claus.  Ladybug kept asking me every day to help her with the letters, and I kept telling her "we'd do it tomorrow."  Tomorrow came, and we just didn't have time to do them.

So I finally stopped what I was doing and helped with the letters.  Ladybug told me what she wanted and I wrote it down for her to copy.  Well, she has about a size 97 font in handwriting right now so it really would have been more like a "novel to Santa".  She asked if I could just write it and she sign her name.  With the other two members of the Triad, I wrote "Dear Santa", signed their names and they wrote in their toddler font. 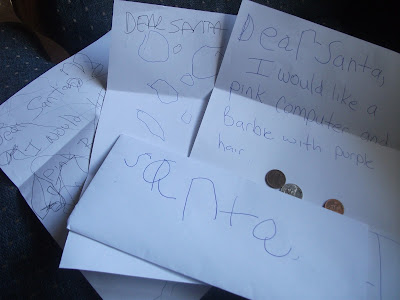 Ladybug had put some change in the envelope prior to sealing it.  I assume it's a way for her to bribe him catch his attention in a monetary fashion.

It's stuff like that where you just love their innocence.

Ladybug wants a new pink computer and a barbie with purple hair (it changes color in water).  So more than likely we'll have to get it for her, but Santa already got them their present.

Thursday morning on the way to the bus stop, Ladybug put the envelope in the mail box and raised the red flag.  When she got home she saw that Santa had already come a couple hours before the post man and picked up their letters.

Have a great weekend my friends.
letters to santa phineas and ferb christmas special