Posted by ericdbolton on December 06, 2010
Last year, Ladybug asked me to put lights on the house for Christmas.  Last year I was swamped with work and Emsters arrival.  So I just threw up a couple strands.  It looked pretty pathetic, but my daughter was happy.
She asked me again this year, and while I was not against the idea, I was only going to do what I could and not go all out.  It's not that I am low on Christmas Cheer, it's just lights cost money as well does food and Dr Pepper.  So I put a few (one more than last year) strands on the front of the house, and Ladybug was pleased again.  Here's the house. 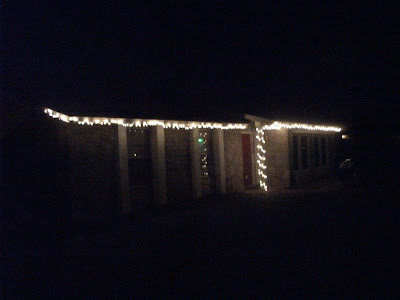 I had planned on posting a blog about the realization that even though I don't think it's perfect (or anywhere near it), Ladybug thought it was great.
That was until she saw other houses in the neighborhood.  She saw houses with colored and blinking lights.  She saw candy canes lighting up yards as well as mangers filled with swaddled Baby Jesuses.
We rolled up to our house and she said, "Daddy, the lights on our house look boring.  I want colored lights."
While it did hurt a little, but I didn't put much effort in it to begin with.  I explained to her what we were able to do and I would try to get colored lights next year.
So don't be surprised if next year my house looks like this....

Have a great week my friends...
christmas lights ladybug