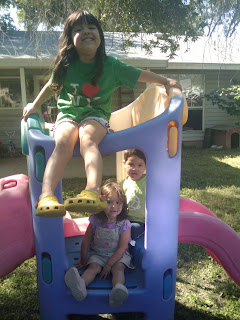 I mowed the front and back yards this weekend.  I say yard because I don't consider what I have as lawns mainly because I don't have what some would call grass.  Lawns are supposed to be luscious beautiful embellishments to a home, but what I have is not.

We've lived here five years now and I've never had grass.  The grass was dead when we moved in from being vacant about six months, and I have never been able to restore it.  Sure I could till it and throw some fertilizer down and then water it, but I have never had the chance to.

It's been five years, Eric! What do you mean you've never been able to?

If you've read my blog for more than thirty-seconds, you've realized how hectic and busy my life has increased over the past five years.  Stuff on the inside of the house (not material things) needed more tending to than the outside of the house.  This includes, a sick wife, new babies, sick babies, and an exorbitant amount of overtime, just to keep things above water.

What would be my lawns have suffered.

In place of grass are clover looking weedish type things.  In the summer, the ground is dirty and hot and not very inviting to play outside.  It's been years since I've mentioned about hosting a BBQ because I'm just too dang embarrassed.

A few weeks ago, MaddSkillz and I took down the trampoline that assaulted Disco and broke his arm.  With it gone, it freed up a good portion of the yard that has previously been under utilized.  I moved the play set which I previously had on the patio to the spot where the trampoline previously inhabited. I cleaned up the patio and with the nice breezy morning, I let the kids play outside again.

They ran, they jumped, they played, they laughed.  They had a great time out there.

I just sat on the patio for a couple hours and watched them enjoy themselves silently thinking this will wear them out for bedtime.  I sat there thinking of ways to make the backyard better.  Thinking of when I will have to make time to do it.  But then it hit me....

The backyard is perfect as far as the kids are concerned.  They don't watch home improvement shows and see what above average families have in regards to landscaping or play equipment and silently covet what they have.  Right now, they're not embarrassed to ask friends over to play.  To them the backyard is just that. a backyard.

It's a place where they can run, jump, play and laugh.  They don't give a crap about there's sometimes more dirt than green back there.  They're kids, they'll make due.

It still doesn't mean I want to be having any backyard BBQ's anytime soon...

Is there anything about your home you're not satisfied with?  No matter how many kids you have, how do you make the times to do the upgrades you would like to do?

Have a great week my friends...
celi disco emsters ladybug