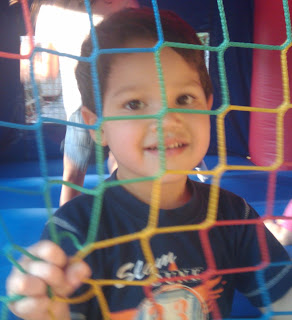 With it being midway through Birthday Season, Disco's birthday falls during All-Star Week.  Today, Disco turns three years old.  Yes I will say it again, and I will say it with each kid even though it's cliche but, I CAN NOT BELIEVE HE'S ALREADY THREE.
I posted this last year and I read it to see if I could top it for this year, I decided that I couldn't.  So if you've read this before then read it again.  It's a good story.
-----------------------------------------------------------------------------------------------
After my oldest daughter was born, my wife and I were content. We had my [step]son and now our baby girl. Within a few months we had to deal with our daughter being sick all the time. And I mean all the time. My wife was constantly taking off from work. She filed for FMLA and was out about 3 months. It was about to run out and they gave her the option to come back to work or to resign. We talked about it and she resigned.
It turns out my daughter has IgA deficiency. It's an immune disorder that makes her prone to illnesses and infections easier than others. She had GERD, numerous ear infections, coughs, colds, and even got a staph infection in her first nine months. She has had multiple invasive procedures to try and figure out what was wrong.
During this time my wife, who has previously stated she wants more children, said that she didn't want anymore kids. MaddSkillz was a breeze, outside the typical ear infections or colds. But trips to the Hematologists, ENT, and Gastros wore her out. I was bummed, because I wanted to have two more. But whatever Momma wanted, that's where I went.
Slowly she started to sway on the matter. She was considering it again. Maybe it was because Ladybug was getting better, but a short time later she was pregnant. We were excited. We were also concerned about what if this happens with this kid as well.
KC researched about the benefits of Cord Blood Storage. We found out that the saved cord blood could help with disorders such as what Ladybug has. We were going to do everything we could to save enough money to pay for the storage.
One day we get a phone call from the Cord Blood Registry. They told us that we approved to get the collection and storage for free.
Yes.
For Life!!
YES!!
If anything were to happen with Ladybug, we would be covered.
Like with Ladybug, KC ended up being on bed rest for my son as well. Her water broke while we were at a Halloween Party. I'm glad it did, because I had fallen asleep on the couch with the kids. We left Ladybug with grandpa and we trotted off the the hospital.
The labor went pretty quick. They didn't even have time to administer any anesthetic. Seth was born early in the three o' clock hour. My son was here. The first born son of a first born son of a first born son was here. I was concerned that I had given all this love to Ladybug that I wouldn't know how to treat this kid the same way. But when I held him, I love just flowed openly from my heart.
He was a month early and labeled pre-mature. He had to stay an extra day in the hospital which killed us. KC was discharged but they told us we could stay until 11PM. We milked every last second of that hospital room with him and was back first thing in the morning.
"Seth" means "at the appointed time." We weren't planning on having him when we did. Why would he come at 36 weeks instead of 37? Why would he come at a time when we were concerned about the health of his sister? The free gift of the cord blood? It was all at the "appointed time."
-----------------------------------------------------------------------------------------------
When I carry him to his room at night and his chest is against mine as he holds on to my neck, I can feel my heart tugging to spend every last second with him.  I want to give him everything and regret not being able too.  Then I remember he's only three.  I have the rest of my life to give it all to him.
I love you Disco.  You make Daddy so very proud.
Happy Third Birthday. 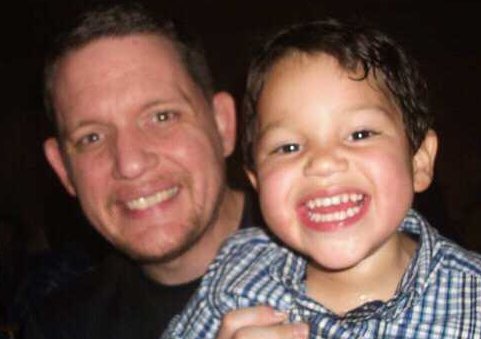