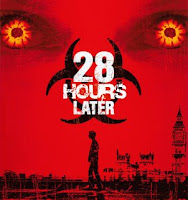 A breakout occurred a few days ago.  My three youngest kids were infected with pink eye.  I'm not sure where they got it from, Scott Baio, but it knocked them out pretty nasty.

After confirming Emsters had it on Wednesday morning, KC came home only to discover Disco and Celi were coming down with the infection as well.  So it was back to the doctor on Ladybug's birthday.

So knowing he was sick, I decided to play with Disco anyways during a break from work.  I was laying on the couch and I was holding him up above me like most parents have with their kids.  When all of a sudden drool came down and landed right in my eye.

I quickly remembered that scene in 28 Days Later where the bird is chewing on some human remains and some infected blood drops into a survivors eye.

Approximately twenty-eight hours later, I started developing the chills and fever.  No sign of of pink eye yet, but I guess this is the time of year I get sick.  I don't think it'll be a great weekend.