My Starving Artist: A Special Request

Posted by ericdbolton on September 20, 2010
Ladybug loves to draw.  One day she told me she wanted to be an artist when she grew up.  Which means she's going to be living with me until she gets married.  Because of her desire, I started posting her pictures in museums and such and calling her My Starving Artist.

It's been a while since I posted one, not because she hasn't drawn since (she's improved greatly), I just haven't done it.  She's requested a few times to put her pictures in the museum on the computer.  Her requests start usually with a "What should I draw Daddy?"  I would think of something she hasn't, she would tell me she doesn't know how and  I would draw it for her.  She would then draw it herself.

Well on Saturday she was drawing and after finishing a cat , she asked me what she should do next.  I ignored her a few times because I was trying to get her brother to do or not do something.  He just wouldn't listen to me.

"Draw your brother NOT listening to me."

A few minutes later, she handed me this... 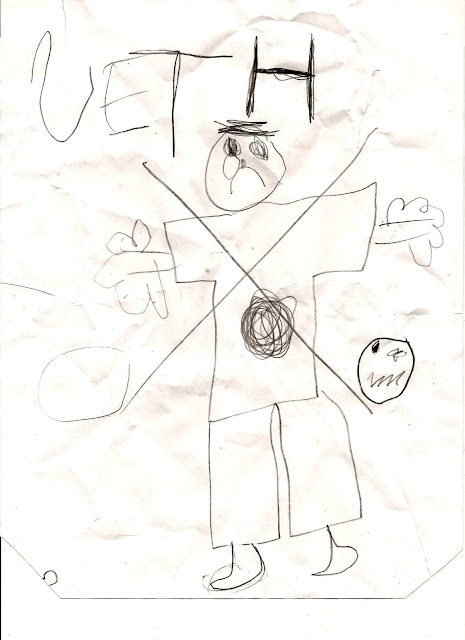 This is "Disco Not Listening To Daddy".


See the sad face?  The giant tear?  I guess that is what happens to kids when they don't listen to Daddy.  The big "X" I can only assume means that it's bad.


I love how her people have bodies now and don't have all their appendages coming from their skull.  She also is in this phase of putting a circle on everyone's shirts.

I have no clue what the severed head is doing there.

I didn't realize my child had a dark side actually.

Have a great week my friends.
disco ladybug My Starving Artist