Posted by ericdbolton on September 02, 2010
Yesterday started like any other day.  Celi started crying at 5:45 in the morning which cascaded to everyone else getting up.  Ladybug got ready for school, I started working,  etc., etc.

About two and a half hours into working my connection is severed.  Futile attempts of trying to get back online, resulted  in my wife having to ferry me to the office on account she had plans which included the van that day.  We noticed Wal Mart had gas for $2.36 a gallon which my wife made a mental note.

I was dropped off and started the rest of my day at work.  About twenty minutes later the phone rings.

Something happened already?  What could possibly happen in the past twenty minutes.

"Hey Honey." she says, nervous and a bit on edge.

"What's the matter?  Is everything all right?"

See as I got five kids, I didn't think it was an interior mess because she would have said it was their mess.

My mind start racing a million miles an hour.  We had talked about needing new brakes when I was getting out of the van.  I thought maybe she dropped the transmission.  Crap how the heck am I going to fix that.  They're stuck on the highway with a dropped transmission and I'm here at work.  How the hell am I going to get to them.  My baby is probably hungry.  Ladybug needs to be picked up.  What the heck does really bad mean??!?!

"Can the doors open?"

"Are you and the kids okay?"

"As long as you and the kids are okay and you can pick up Ladybug then everything is fine."

It went on for another minute or two.  I assured her it was okay and we'll be fine.  I wasn't angry and anger never entered my mind.  It was an accident.  But her description though made my over imaginative brain think of exactly how it looked.  She said it scraped along the side of it.  So I pictured a wrangled mess of metal and red paint where the pole pillar thing violated my car. 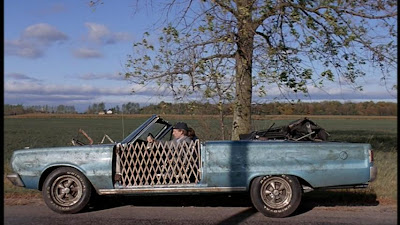 Great, we need to buy a new baby gate.

You see, this is totally something that I should have done and not her.  I'm the one that doesn't pay attention to what I am doing, not her.  She was really upset by this and felt pretty stupid for what happened.

Then she sent me a picture. 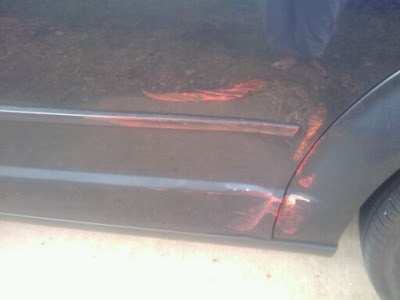 I know it doesn't change things from her point of view.  But honestly it would have been fine before I saw this picture.

I don't have to buy a new baby gate.

Sure the picture doesn't get the depth of the damage, but it's not "scraped along the side of the van" like I imagined.  It's nothing that  a shop on the west side of town can fix or someone on craigslist can't fix for fifty bucks and a six pack of Miller Lite.

Heck, it's even something I could do myself.  I'd even corporate the fresh coat of red paint.


Yes, I know it's technically not a "dragon", but "Griffin Wagon" doesn't have the same swagger..