Posted by ericdbolton on September 03, 2010
From the first time I ever shared a meal with MaddSkillz, I noticed something about him.  He's not a very clean eater.  It wouldn't be so bad if he was 15 months old in his high chair, but he was six years old at the table.  Sure, sure we can attribute to him being a boy and boys are messy, but I'm not going to apply gender stereotypes to this (even though Disco seems to be on the same track as him unfortunately).
Let me give some examples of what I mean:
Again, I met him at six years old.
At first I didn't know my place to correct him, thinking his mother would say something.  In her defense, being a young single mom, she felt that's just what boys do.
Yeah, I didn't believe that.
After meals his hands would be violently messy and his napkin was virginal clean.  I made him a deal if he could make it through a week of eating and not end the meal with most of it on his fingers, I would give him five bucks.  His napkins were used, his hands we're pretty much clean and he was five bucks richer.  Monetary incentive helped him with that part of his training.
Fast forward eighty-eight miles per hour to present day.  We still have problems with this boy eating.  Almost every meal we're telling him something that he should know how to do.  His offenses could be deemed rude out in public or even illegal in some third world countries.  The other night we were stressing his eating habits to him in an effort to realize this is not something a gentleman would be doing out on a date.  Since he is not dating a girl from the trailer park, as I offend all my trailer park readers she probably doesn't want her boyfriend to eat like a Neanderthal. He would make excuses why he eats the way he does and then you realize it's just not worth arguing over basic manners with a fifteen year old.
The next morning, KC is taking him to school and he's eating his teenager breakfast which consists of a un-toasted cherry pop-tart.  His mom sees by the time they're almost at school he's covered in crumbs.  His  mom questions his problems with using a napkin or a plate and he feels it wouldn't help him.  He then went on to seriously ask if we could give him eating tips.
KC called me on the way home and told me the story.  I was eating my work at home dad of five kids breakfast of a toasted s'mores pop-tart and there wasn't a crumb to be found.  So I told her if it's tips he wants, I'm going to find some index cards and make him some tips.
So for the benefit of those at home... Here are some of them... 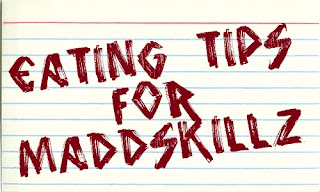 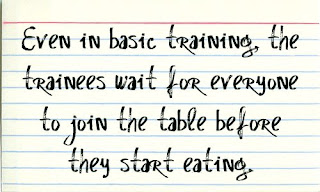 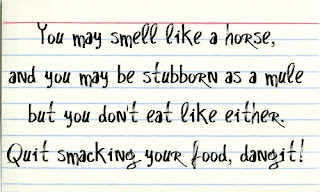 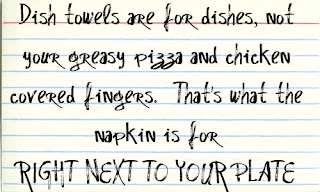 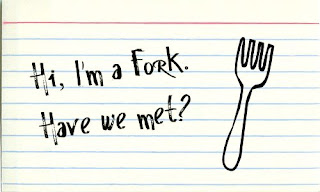 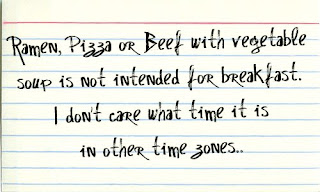 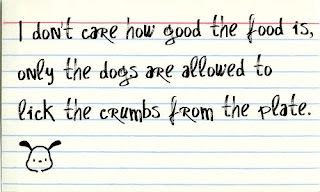 I wish I was joking about the exaggeration of some of these.  Each of these issues have been brought up to him IN HIS TEENAGE YEARS.  Forget it being a guy or boy thing.  Straight A kids should know better, right?
And he does say he eats the way he does at home because he is comfortable.  When he's out with T or her family he says he minds his manners.
What do you think my three readers?
Have a great weekend my friends and while you're at it, check out Dad-Blogs for Fatherhood Friday.
eating habits maddskillz