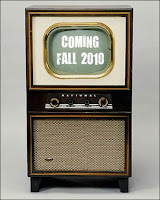 Just to let you know, this post has a bunch of material which some might deem to be dorky.  Just be warned.  You might not get the jokes if you are not familiar with the scenarios.

During the summer, I get excited when I see new shows will be gracing the upcoming Fall TV Line Up.  There are usually about seven or eight that I really want to catch and if you couple that with the returning shows that I watch, it makes it almost impossible to watch them all without a DVR.
Even with a DVR I could not watch all the shows and catch all the episodes.  I end up deleting them in hopes to maybe catch them online or maybe a DVD sometime in the possible future.
But we got rid of our DVR earlier this year.  So the chance of me catching something new is really slim.  My best bet is to rely on shows that come on USA or TNT to catch the re-runs.  For this reason, I feel I am to blame for the cancellation of Heroes, Flash Forward, and 24.  I just couldn't find time watch them.
There are often times blogs might get too overwhelming with content coming out all the time and some might get skimmed through and deleted.
Which I feel this blog is the victim of very often in most people's readers.
So in an effort to garner more readership and higher rankings, I sat down with some blog executives to come up with new and exciting blog ideas for you all to read and enjoy.
We'll start with....

Having five kids has finally driven Eric crazy.  He stops wearing a shirt and starts wearing a Luchador mask and cape, starts trying to talk in Spanish and calls himself El Supremo Maximo.  This is his story.

Mariquita is upset because yo make her wear her luchador mask to la esquela.  Yo tell her it is her heritage and she should have nothing to be ashamed about.  She tells me she does not speak Spanish and she wants to make amigos and not lose amigos.

La Esposa Maxima does not feel the same way that yo do.  She tells mi to stay away from la esquela.  Yo tell her that yo, EL SUPREMO MAXIMO, can voy wherever yo want to voy.  Because yo am the Northern Hemisphere Champion and the greatest Mexican in all of Wrestling.

Ella tells mi "But you are not mexican, you are white."

So I called her a racist.

If lame-assed photoshop pictures are your style.  You'll love this new take of Babies in Beards.  Check it out.
We have my babies....

We have your babies...

We even have celebrity babies...

Eric finally follows his dream of being a stand up comedian.  But since he spent most of his life reading comics and watching cartoons, that's all the observing he has done.  He takes the moniker of Cobra Comedian (get it, it's a pun off the character Cobra Commander) and goes cross country to promote his stand up and attend Comic-Cons.

When did he start doing stand-up?

He stands over my semi-conscience body and I order a Cobra retreat.

Only a few people will get that last part.

At his annual physical, Eric's doctor discovers something abnormal in his blood work.

So today I went to the doctor and she tells me something about my blood work.  I know all about PHI an what not in regards to medical privacy, but who cares?  I talk about going to the crapper sometimes, you know?

But my doc tells me I have a high concentration of midi-chlorians in my cells.  The term sounded familiar, but I couldn't quite place it.  So I asked her if it had anything to do with Lupus?

She said no, but it meant that the concentration in my cells is high enough I could be a Jedi or a Sith.

So I wave my hand in front of her and tell her she will not charge me for this visit.

She tells me she won't charge me for the visit because it's covered 100% by my insurance.

I also waved my hand for dramatic effect.

Afterwards, I went to Wal-Mart so I can buy a Snuggie to complete the look.  I stood at the door and made it open and close with a wave of my hand and occasionally walking towards it.  Security comes up to me and they ask me to leave.  They tell me that I am not allowed to "use my powers" there.

So I called him a racist...

May the Force Be With You My Friends....

So what do you think my dwindling supply of readers?  Do any of these blogs interest you?  Which ones are you looking forward too this fall??  Or should I stay with the same format?