Posted by ericdbolton on September 27, 2010
If you noticed Thursday, my wife became the San Antonio Similac Spokeswoman in regards to the Similac Baby Formula Recall of 2010.  Within minutes of the piece airing on the news, people were contacting us saying they saw her on TV.  People were excited because they saw someone on TV that was a real person.  Not a fake housewife or reality show wannabe.

The news started to spread that she had five kids and it blew up from there.

Offers started coming in wanting to know her story.  She had a few interviews and would talk about how it's been nine years since she met the person who would be her husband along with the story of each of our kids.

But when they found out I was a Daddy Blogger, the crap got real...

Someone sent me this weeks cover of US weekly..   How the heck do these magazine get this stuff? 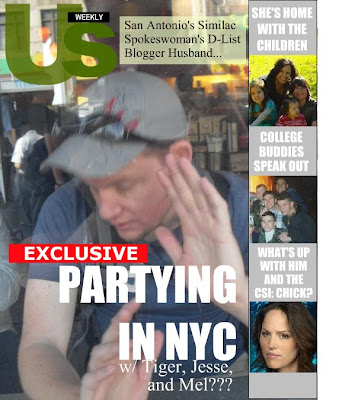 This is insane..
Have a great week my friends...
csi chick party in new york us weekly