Posted by ericdbolton on August 23, 2010
Today starts the first day of the school year for two of my kids.  For MaddSkillz it's the beginning of his Sophomore year of high school.  While he is no longer a fish and has assimilated quite nicely, starting school for him is not a big deal.  It's just the start of another year of him not wearing the nice polo style shirts we buy for him in favor of graphic tees with retarded depictions of headphones hanging from his neck (only in yellow).

The big deal today is it being Ladybug's first day of Pre-K.

This is something she's been excited about for a very long time.  Last week she was counting the days down until today.  When MaddSkillz got home last night from his father's house, the first thing she told him was.. "Hey [MaddSkillz], I'm GOING TO SCHOOL TOMORROW!!!!!"

So with her Disney Princesses backpack and her new clothes Nana bought for her, she got ready and was really  anxious to get to school.

Since this is actually my first "First Day of School", I took a shower, threw on some shorts, a shirt, a cap and my sandals.  I had no idea this was an end of summer social event.  KC showered, shaved, did her make-up, hair, gave herself a Mani and a Pedi got collagen injections and even rented a stretched limo.  Apparently, you have to look nice on the first day of school because you and your kids will be judged by other parents based on your "First Day of School" appearance.

We take pictures prior to leaving, and I pretty much lose it at the first picture I take (the first one below). 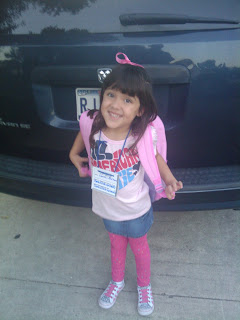 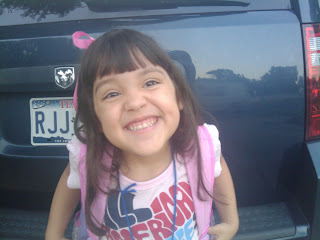 I'm not sad about having to let my daughter go out into the world.  I'm all about her experiencing things she is excited about.  I know she will be protected and will come back home in the same condition as she left.  It's just one of those things as a parent you can not prevent from happening.

But I was a hot mess.

So back to Real Housewives with Pre-Kindergartners of San Antonio.

KC tells me and the rest of the under-dressed undesirables to stay in the car as she makes her grand entrance.    I drive around the school parking lot (I know what you're thinking, she rented a limo.  Yes, but she didn't rent a driver and guess who had to drive a stretched limo through a school parking lot.) as other moms with their hair all did up take their kids to the school cafeteria where I assume they drink mimosas and talk about their sandal-wearing spouses.

Ladybug was a little nervous according to KC and didn't want her mom to leave so soon.  KC stayed as long as she could, told her daughter good bye and left the school building.

It wasn't hard to find me at this time because I was the only one left in the parking lot.  They must have been good mimosas.

Have your kids started school?  Does it get easier?

Tomorrow will be the first day of her riding the bus.  I honestly do not know how much more of this I can take.

Have a great week my friends.
first day of school kc ladybug maddskillz