Posted by ericdbolton on August 20, 2010
I survived New York.  I had a blast with my mother, brothers and future sister-in-law.  While we didn't tear the city down, we left our mark.
My mother had stuff planned for us everyday.  It wasn't a "hey let's see where we can go walk today" kinda trip.  She had it all planned out.  Which honestly helped out a lot because I wouldn't have known what to do other than go to Times Square over and over again.
Day 1 (Thursday)
My brother Ed, and future sister in law Christine arrive from Houston minutes after I arrive from Austin.  We meet up in baggage pick up and I'm surprised that my mother booked a Town Car to pick us up.  Not surprised because it's something she wouldn't do, but surprised because I had expected to take a Taxi.  We pass the alien ships from Men In Black and about 30 minutes later we're at my mother's apartment.

After lunch the plan was to head out to the Empire State Building, but it was really cloudy and it was expected to  rain.  So we didn't even try to attempt it.
Side note.  My mother lives in Hell's Kitchen (Yes where DareDevil protects) and all the major attractions are within walking distance from her place.
But we walked around for a little bit while my mom and Christine went shopping.  I pick up some souveniers, some little Asian lady calls me a liar when I tell her I'm going to Heaven, and we head back home to await my brother Evan's arrival.
My brothers and I head to Times Square later in the evening.  I took some pictures.  I even convinced a certain super hero not to beat me up. 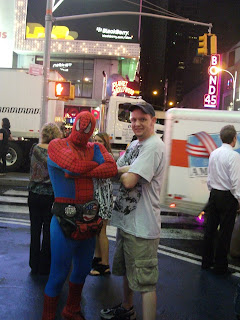 But I couldn't convince a former Heavyweight Champion of the world I wasn't an evil Russian from the 1980s. 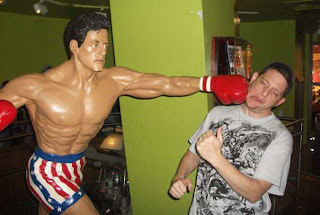 Day 2 (Friday)
I take my first Subway ride and we go to the Staten Island Ferry.  The Ferry uh..ferries us past the Statue of Liberty to Staten Island.  Reading GiJoe comics when I was a little kid, I remembered that the Joe's original HQ was located on Staten Island.  More specifically Ft Wadsworth.  Even more specifically BENEATH Ft Wadsworth. But Cobra infiltrated the base and General's Hawk and Hollinsworth blew up the base as to take out Cobra Commander and Destro.  They did a good job rebuilding the place in the last 25 years. 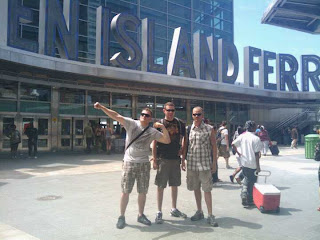 We finished up the day with a Subway to Times Square in the daytime, where I bought more souveniers.
Day 3 (Saturday)
Day 3 was fun because I entered a world of secrecy and possibly ATF raids.  We went to Canal Street.  Canal Street has a ton of vendors and store fronts of people trying to sell various items (Sunglasses, watches, jewelry, purses, clothes, etc.).  But the thing is, you're supposed to haggle over the price.  I saw a Disney Princesses matted picture on a table and asked how much it was.  The guy said 20 bucks.  My mother and I both said we saw the same pictures in Times Square the night before for five bucks.  He called it garbage.

He asked us how much we wanted it for and we said five bucks.  He said 15.  We said no and left.  He called out to me and said he'd give it to me for six.  I gave him a ten and he said I could have one more for four.  So I got two matted pictures (approx 11x14s) for 10 bucks when he was trying to get me to buy one for twenty.

On Canal Street, people walk up to you and ask if you wants watches or purses.  You ignore some and the ones you don't show you a flyer of watches and purses they have.

They're knock offs of brand names.  If you say yes you want to see it, you follow them into a room or thru a fake wall, up three flights of steps and then they knock on a door followed by a password.

I couldn't hear what they said, but it was like.. "bowl of chili dollar twenty" or something like that.

Inside the room there's tons of purses which you attempt to haggle again.  I didn't even bother.  My wife has a ton of bags and there was no way in heck I was going to contribute to her addiction.

While waiting for the women to shop.  My youngest brother Ed, decided to start giving out free high fives up and down the street.  We got mixed results.

After Canal Street we went to the World Trade Center.  There wasn't much to see at Ground Zero because the construction site was blocked.  I would think that after almost 9 years, there would be more progress. 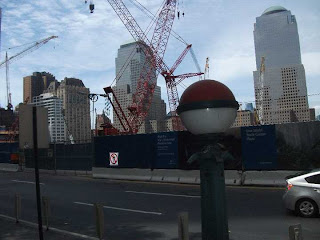 After World Trade Center we made a stop on my request to see the Ghost Busters' building.  It was sad to see that it wasn't in operation any longer.  It's actually empty.  When I got home, I looked it up and I had the wrong address.  We were on the wrong side of town from the Ghost Busters' HQ.  This is what I thought was  the place. 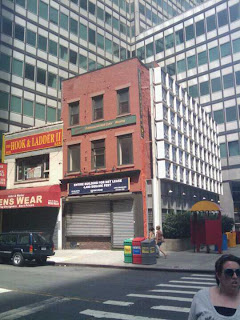 But along the side of the building is a pretty ineteresting clock.  If you've seen Big Daddy with Adam Sandler, there's a scene where he walks past this clock with Julian.  So it wasn't a total loss.

Day 4 (Sunday)
We headed to Fifth Ave and Central Park.  We stopped at FAO Schwartz Toy Store to look around.  Getting a hot dog from a vendor after leaving, my brother asks me "Hey is that Kobe Bryant?" and sure enough it was.  He had what I'm assuming were his two daughters with him, walking right past us.  I wasn't about to ask a father for an autograph or a photo op. It would only draw attention to him.  My brother did say however, "What's up Kobe?"   To which Kobe replied, "Hey Man" or something to the like.

I also went to the top of 30 Rock for some pics.  I did not meet Tina Fey however.

At the park my mother took a picture of us on some rock formations.  She apparently doesn't believe in zooming in, so when I got the pic I had to crop it looks like we were part of a Twilight movie poster or something. 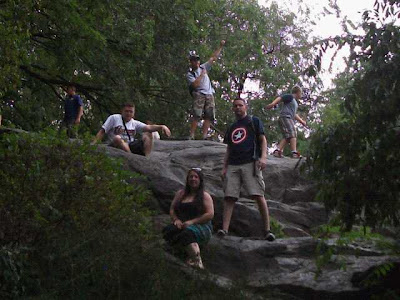 Ed also brought High Five Guy back to Central Park.  This time we found a piece of cardboard and wrote FREE HIGH FIVES.  Apparently everyone in our path LOVED it.  He was getting high fives from everyone. A wedding photographer stopped him and put him in some couple's wedding pictures giving them high fives.  Tourists even came and got their picture taken with Ed.  It was pretty amazing.

Day 5 (Monday)
Ed and I went to Times Square to try to get on Good Morning America.

We also visited the USS Intrepid Museum for a while and got home early to take my brother Evan to the bus stop so he could catch his plane that evening.

Day 6 (Tuesday)
I caught my bus early that morning.  I landed in Austin at 12PM.  My family was there and I was super excited to see them all.  I didn't want to let any of them go.  I gave them their gifts in the van on the way home and they were excited about their New York stuff.