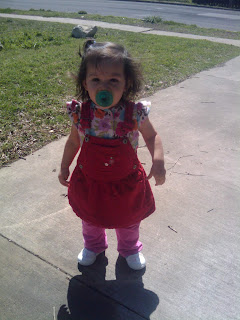 "Daddy Paci?"  I hear this request as I get Celi out of bed in the  morning.  I move blankets and her pillow.  I get on the floor and search under her crib moving forgotten toys.  I spot one in the far corner just out of reach of my fingertips.  I usually use of the forgotten toys to help bring it within reach.  I find the paci and give it to my second daughter.

"Thank you, Daddy" and she runs off to start her morning.

When she's fussy, we just plug it in her mouth and she's fine.  It's one of those things we know we should have taken care of long ago, but like Disco's pooping habits, we haven't really been the best at following through.  And also like Disco's refusal to shed his diaper, it's her security. 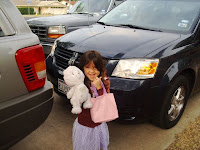 Ladybug loved the a pacifier as well.  She'd lose them, we'd find them or buy some more.  By her first birthday she lost them all again.  We made the decision to just not buy anymore.  She'd ask for one and we'd tell her they're gone.  She didn't really  have a security item afterwards.  Not until her second birthday.  Gigi (my mother) sent Ladybug's birthday presents from New York and included was a 25th Anniversary Edition Care Bear.  Ladybug didn't know what in the world a Care Bear was, but it became her most prized possession.  Heart Bear never left her side.  It went with us to the store, to the doctor, everywhere.  We lost it for about a week and Gigi sent another one.  Heart Bear 2.0 wasn't a big hit.  It was like replacing a fish that died while you were on vacation.  It looked like your fish, but didn't feel like your fish.  It was found and after almost three years, Heart Bear helps her go to bed at night and comforts her when she's upset. 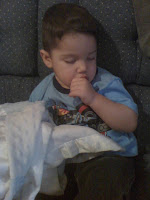 Disco wasn't big on the pacifier.  Since Emsters isn't either, I believe it has to do with being nursed.  He did however find cliched security in a blanket.  The blanket was a  baby shower gift from a co-worker.  I'm not sure how it started, but like Heart Bear, he took the blanket everywhere.  I've been guilty of having to drive across town around midnight to retrive the blanket from a relative's house.  Again like Heart Bear, it helps him sleep at night and calm him down as well.

With Celi's pacifiers, it's one of those things we know we need to cut out as soon as possible.  We know we have about six pacifiers in the house.  Currently we can only find one.  She went to bed on Sunday without one and she screamed for almost an hour.  She woke again later and screamed for another hour.  Sure enough when the kids woke up the next morning, one was found within 30 seconds.

We need to get her off the pacifier.  But she doesn't have a Heart Bear or a blanket to fall back on.  Do any of my six readers have any ideas on how to curb her habit?  Smoking maybe?