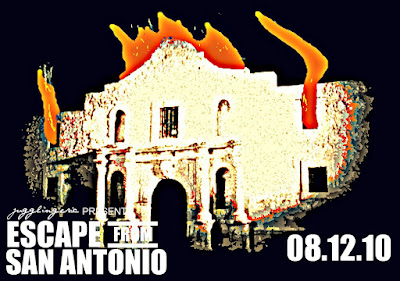 With my survival of Hell Week and my wife safely home from her week of spa treatments, manis and pedis, chocolate covered strawberries being fed to her by the cast of 300 in Tim McGraw hats.  It is now my turn to go away for a while.

In about three weeks, I'm taking off to New York for six days for the first time ever.

But Eric, you gave us all this complaining and moaning and petitions and stuff that your wife was leaving for FOUR DAYS.  Now you're taking off for SIX?? To another state?!?

Yep.  It is the motivation that got me through last week.

Now this wasn't a decision I came up with while she was gone and said, hey I'm going to pull a Jon Gosselin and leave my wife at home with my five kids while I party with Ed Hardy in New York.  It actually came about very serious like.

My mother moved to New York to work as aspiring actress in 2005.  Sure one would think that following a dream later in life rather than earlier would be a weird decision.  But she had three kids, what was she going to do?

Well the acting didn't work out so good, but she has a cush job that requires her assistance in the Big Apple.

I got five kids, what am I supposed to do put them in baby cages in the cargo hold then push strollers through the streets of Manhattan?

So I witnessed a conversation on Facebook between my mother, future sister in law and brother about planning a trip in August.  I got kind of pissed because I wasn't included.  I joked around in the thread when I was able to make it and it was THE THREAD KILLER.  I assumed the future conversations about New York took place in Direct Messages.

Talking with KC, I voiced my frustration and not understanding why I'm never invited.  She told me to make plans to go when they are going. We'll find a way to pay for it meaning I will have to work my butt off in overtime  and I waved her off as crazy and possibly a bit inebriated.

"I'm not going to leave you with the kids while I'm off in New York acting like a douchebag with my brothers while they call everyone gay and jackasses."

She said it was fine.

I took my concern to my mother and she responded quite positively claiming they just figured I wouldn't be able to afford the trip or just the time to get away.  My brothers do not have any kids and aren't married [yet or any longer] so they have that luxury of saying let's take off here and now.  Whereas KC and myself do not.  I asked her if anything comes up in the future to just ask us if we could make it and let us make the call if we can or not.

She booked my flight and I'm looking forward to going.  We'll be staying at her apartment so there's no concern about paying for a hotel.  She lives mere blocks away from all the major sites which means I can walk to Bryant Park to see Fashion Week.

We'll just raid her fridge when we're hungry so food won't be a problem.

I'm probably SAVING us money by going to New York.

I should make it a frequent event.

I'm really looking forward to it and I'll be posting more New York related stuff in the future.

Have any of you been to New York?  Did you enjoy it?  Let me hear your stories.