American History - The Statue of Liberty

Since I'm gearing up for my trip to New York City I felt it was wise for me to learn my history on popular places and landmarks.  That way if my kids were to ask me about a certain place or landmark, I would be able to give them a complete history of said place or landmark.

I will start today with the Statue of Liberty.

The Beginning
The Statue of Liberty (originally called Liberty Enlightening the World (French: la Liberté éclairant le monde)) is a massive sculpture that stands on Liberty Island in New York Harbor. Designed by Frédéric Bartholdi, who was inspired by the view of the French law professor and politician Édouard René de Laboulaye that any "memorial to [American] independence" would properly be a joint project of the French and American nations, the Statue was a gift of the people of France to the people of the United States. It was dedicated on October 28, 1886, and it has become an iconic symbol of freedom and of the United States.


Nothing much happened with Lady Liberty for the next hundred years.  Sure she was there welcoming people like Balki Bartokomous escaping vicious socialist societies, but what else really made her noteworthy? 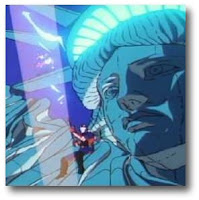 1987
In 1987 Cobra, a ruthless evil terror organization determined to rule the world, launched an attack on the Statue of Liberty.  While Liberty Island has no strategic advantages to taking over New York, Cobra attempted it anyways.  They were however surprised by GiJoe, a highly trained special mission force.  Cobra was stopped as per usual and GiJoe saved the day as well as Our Lady Liberty.


1988
Due to damage from the Cobra attack the year prior,  the Statue was in a state of repair.  With the symbol of liberty looking like crap, the city of New York felt the same.  Beneath the streets,  rivers of slime began to rise and it fueled a ghost that lived in a painting to kidnap a baby.  When a situation like this arises, who you gonna call?  That's right the Ghostbusters.  They figured the only way to stop the ghost living in the painting was to take the slime and cover the Statue of Liberty.  The slime along with the song  "Higher and Higher" brought the Statue to life and it walked through downtown and saved the baby and the day. 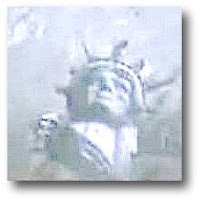 1998
For the next 10 years the Statue lived in relative peace.  Aside from the occasional bird poopage nothing major happened. That is until New York was flooded when  a comet discovered by a Hobbit crashed into the Atlantic Ocean.  The Statue was engulfed in a giant wall of water that decapitated our fair lady and sent her head rolling through the flooded streets.


2000
In 2000 Erik Lensherr A.K.A. Magneto was tired of homosapiens and wanted to rule over them.  So he invented a device that would turn people into sea monkeys.  Magneto and his Brotherhood of Evil Mutants used Liberty Island as a staging area to turn New York into sea monkeys.  They were stopped by the X Men and everyone was saved.


2008
Eight years after the Mutant attack and ten years after the comet caused decapitation, a monster known only as Cloverfield screamed and cut the Statue's head off once again.


The Statue of Liberty's head is currently being held on with Duct Tape.  Mythbusters' Adam and Jaime have both proved that it is plausible the tape will hold her head on for the rest of eternity.  Even if we throw ourselves in a nuclear war and the earth is ruled by a bunch of damned dirty apes.


I for one will probably not visit the Statue of Liberty after all the stuff I learned about it.


Sorry Mom.  It's just too dangerous.