The Story of The San Antonio Screw Job

I've mentioned quite a bit about how my son and I enjoy watching professional wrestling.  Around 9 and 10 years old he acquired a nice collection of wrestling figures (the same ones I used in my Wrestling Zombies movie).  He also had quite a few different replica championship belts.  Now they are not the metal ones, but the plastic ones you can find in the toy aisle at Wal-Mart or Target.

Around this time, he and I would have little "matches" where I would try and pin him for a three count and win the belt.  These were usually instigated by me when he wouldn't expect it.  For instance if he was watching TV I would come up and pounce on him and do a quick three count.  I'd declare myself the champion and run off victorious.

He'd complain that he wasn't ready, I counted too fast or his shoulders were not down.
Needless, I'd give into his whining and give him back his belt because he took it seriously.  I eventually stopped playing with him because he'd get upset every time.

November 17th, 2005.
My daughter  is one month old.  I'm particularly happy this morning.  It could be that I only had two kids at this point in my life, but more than likely it was because it was my birthday.

I had my little ladybug with me when I went into MaddSkillz room to wake him up for school.  I would pretend to have Ladybug kick him in the face while he was sleeping to wake him up.

That's when I had the idea.

I sat Ladybug on his chest and counted a quick onetwothree!!!

I declared Ladybug the champion, grabbed the belt off his nightstand and took off from the room with my new protégé in one hand and her belt in the other.

Huge smile on my face.

Racing behind me was MaddSkillz pissed off like he was screwed out of an actual match.

It was the last time anyone of us had a wrestling match with him.

A month later at Christmas, Ladybug got this little present for her big brother. 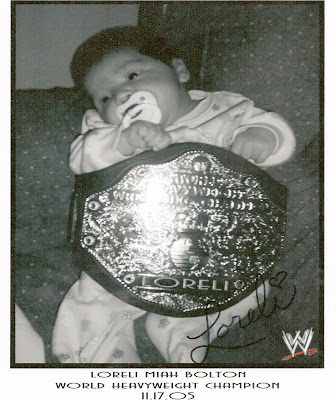 That's right, a framed autographed picture of her as champion.  Complete with WWE logo and EVERYTHING.  I managed to take the picture before I gave him back the belt.

Oh he was pissed.  He hated the picture.  Still after a month he still would not concede to losing a game.  He wanted to throw it away or something.  His mom and I got upset at him and we took the picture back and set it up in our room.

I'm in the kitchen and MaddSkillz is playing with the kids.  It's a rare occurrence because he's usually telling them to leave him alone.  Everyone is having fun and I hear MaddSkillz say something.

"I won and you have never beat me Ladybug."

A few minutes later, I find the framed picture and show it to Ladybug.

"When MaddSkillz comes back in here, show him the picture and tell him that you HAVE beat him before."

He comes back and Ladybug shows him the picture.  He immediately objects and says that it never happened and that Daddy cheated.

Really?!?  Really after five years?!?  Is it really going to go on forever??


Have you noticed if your kids (if they're old enough) can be sore losers?


Have a great day my friends...