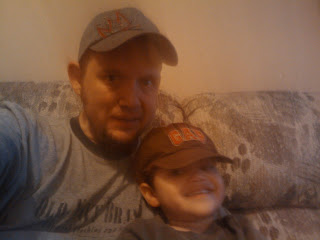 I'm back from two weeks of reruns.  Thanks for everyone that stopped by.  I'm more than likely limit posts to three times week now.  Except this week when there's only going to be two.


In the past five and a half years I have developed a few idiosyncrasies.  The fact that I've been married for five and a half years can be contributed is purely coincidental.  But I went from a single guy with none to little responsibility, other than myself, to a husband and a father pretty dang quick.

So over the past years due to many factors: such as financial; working 55+ hours a week; raising kids; being married; maintaining a house; I have began to manifest an onset of an ill timed panic attack on occasion.  It is usually brought on when more than one thing is thrown at me at a particular time.

Let's take the kitchen for instance.

When I was a bachelor living it up like Tony Stark, I didn't do dishes on a regular basis.  Most of my meals came from boxes marked "Tyson Chicken Nuggets", "Corn Dogs", "Chicken Pot Pie".  When I did prepare food, I had enough for two and a half days.  So it wasn't like I needed a "clean" cookie sheet for the corn dogs from the previous nights nuggets.  The point being, I didn't do dishes that often during the week.

Now that we're a family of seven, forget about it.

Honestly it seems like people DO forget about it.  If one day happens to be skipped for whatever reason, it can pile up like a Manila Dump on verge of collapse.

Now couple this on a busy weekend and we get home on Sunday about 5:00PM and the kids usually eat by 5:30PM.

So now you have dishes + dinner not even started + hungry kids + breastfeeding baby + a decision to go get something instead in a drive thru and Eric gets a panic attack or as my wife so tenderly calls it "Freaking Out".

Now these attacks are more me trying to solve all problems at once.  I have a hard time concentrating when overwhelmed with physical disarray now.    And the denominator in these "freak outs" is that there is some deadline that needs to be met.

My chest tightens and my stomach twists.  It's not fun.  Once the variables are out of the way I can resume to less a sense of urgency and I am cool.

But I am not the only one that goes through this at home.

Aside from his dashing good looks and his way with the ladies, Disco quite possibly picked up some idiosyncrasies from his father as well.

Like I require things to be done in a certain order or way, so does he.

He's coming into his own by trying to be more independent. But he has his times where if things aren't the way he needs them to be, panic will set in and he'll freak the heck out!!

Now these aren't just fits because he's not getting something he wanted. I think the underline factor with him is also he's not in control of what is going on.  He's coming into his own as boy in his mid-two's and wants to be independent.  The things that are easy to everyone else actually overwhelm him and he has his little melt downs.

Am I passing down my freaking out behavior down to my son?  MaddSkillz has suffered from anxiety and similar bouts of freaking out over situations he is unable to control.

Could my sons be picking up these less than attractive things from their pops or is there something else?

I think there's something else.  Something that no amount of counseling or medication will get rid off.

I think we go crazy because we're out numbered by the females populace in our house.  What do you think?