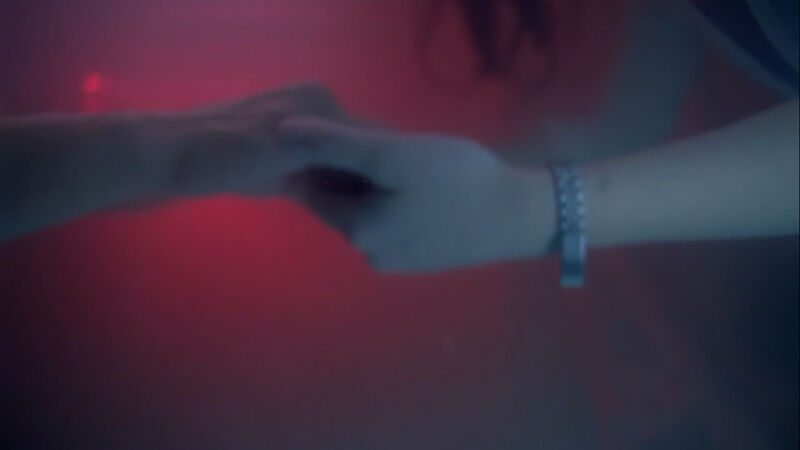 A few weeks ago during the last few episodes of Lost, two of the characters died together.  The couple was Jin and Sun Kwon.  They had just been reunited after being separated by apparent death and three decades for almost two seasons.  The couple had a daughter who Jin never met (because he was stuck on the island when Sun was rescued).  They were finally reunited an episode before they died.  They were on a submarine with other characters trying to escape when a bomb exploded and Sun became trapped.  Unable to free her, Jin said he was not going to leave her again (He left in Season 1 on a raft in hopes to get her rescued when it blew up, and the freighter he was on blew up as well at the end of Season 4.)  Jin had a chance to save himself but didn't go.  Sun told him to leave, he said he wasn't going to leave her again.  They both died.

It was the saddest moment of the series beating Charlie's death.

So it sparked a conversation between myself and KC.

She told me that I better leave if we happened to be in a similar situation.

I told her that I most certainly would not.  There would be NO WAY IN HELL that I would leave my wife alone to die.  I know. I know.  I have five kids.  But there is no way that I would leave my wife if I am able to escape.  It's not that I can't live without her, I just can not let something happen to her if I'm not willing to let happen to myself.

She thought I was crazy.

I asked her if she would leave the kids.

"Because I'm supposed to protect them." she said.

What if the situation was reversed?

In the theatre of your mind picture the following situation.

[The bomb on the submarine blew up and tore a hole in the hull.  Water is flooding in.  Jack tells Hurley to take Kate to safety since she was just shot.  Metal had trapped Eric against the wall.  After getting some of the debris removed with the help of Jack and Sawyer.  KC realizes that Eric is trapped unable to escape.   Sawyer is knocked out by something and Jack has to help Sawyer.  Jack knows that Eric and KC haven't seen each other in two seasons and offers to leave the last oxygen tank for them.]

Eric:  You're just going to leave me.

Eric: You're not going to die with me?

Eric: Well I guess this is it??

KC:  If it makes the last few minutes of your life feel any better.  My next husband will have some big shoes to fill.

Eric:  Tell the kids I love them, if you could.

KC:  Yeah, speaking of the kids.  Do you mind if they call my next husband "Daddy"???

KC:  Don't worry about it.  I'll let them decide.  What do you think about Sawyer?? Do you think he's over Juliet yet? How long after you drown will it be acceptable for me to hit on him?

Eric: How long have you been thinking about this??  Is this something we should really be talking about in my last minutes of life??

Yeah, it would probably go something like that.  Now she would not be so flippant as portrayed above.  But she would think of the kids (which I would hope she does).  I would not want her to stick around for me if she could be saved.

A friend of mine who is not married said that he would have left her to drown.  He wasn't being mean about it, although he said there were hotter women out there than Sun he didn't want to make the kid an orphan.

Is it a husband thing?  Am I the only one who thinks this way?  Yeah I know that the kids are involved.  But can you really leave your wife to save yourself?  I know it's a tough question.  But speaking hypothetically.


And while you're at it.  Check out Fatherhood Friday over at Dad-Blogs.
dying with your spouse leaving a spouse to die lost final season