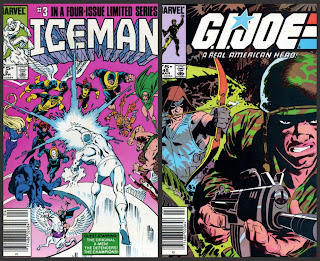 The first comic book I remember reading was the limited series of Iceman #3.  My friend Jeremy Miller gave it to me after I spent the night over at his house one weekend in fifth grade.

I recall that it was the most confusing thing I've read, EVER!!

Mainly due to the entire issue dealing with flashback characters and dream sequences.  I had no idea who any of the characters were.  But for some reason I really liked it.

So next time I was was visiting my grandmother, I went with her shopping and I picked up GiJoe #45 on the rack at the grocery store.

Again, I had no idea what events lead up to Ripcord infiltrating Cobra Island.  I did know that I wanted to get the next issue.

It began my fascination with comic books.

During the next 12 years, I collected various different titles.  X-Men, Spider-Man, Batman, Superman, some Image, Transformers, and a slew of others.

All in all I probably collected a little over a thousand comics during my lifetime.  Currently they are in my attic, my utility room and under the sink in the bathroom.

I quit cold turkey in 1997 about a year after I left school because I needed the money for rent.  A few years later, I had to sell some of them so I had enough money for rent one month.  It's been about 13 years since I last bought a comic book. If I bought a book today, I would have no clue what's going on. But if I had the extra cash I could justify spending on myself, I would get a monthly title or two.

This weekend, TWENTY-FIVE years from when I read my first comic book, I took my family to FREE COMIC BOOK DAY.

Free Comic Book Day happens on the first Saturday of May and is just as it suggests.

KC wasn't all that excited to go, but it was either that or stay at home by herself.  We piled into the van and went to Alien Worlds close to our home.  I was afraid of a line and was concerned when there wasn't one.

I wasn't sure if they were going to be doing it or not.

We go inside and everyone's eyes look at the invading horde infiltrate their domain.  I see a gathering of people at a display case and notice stacks of the free comic options.  The kids notice the collectibles and want to try and play with the Spider-Man, Thor and Batman statute busts.

We get our books and leave before my kids ruin anyone's Magic: The Gathering game.  The kids were excited about the books they chose. 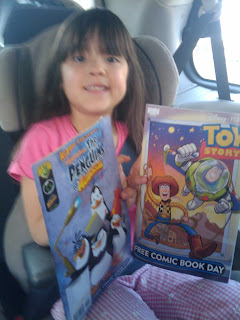 Ladybug got Toy Story, and a Penguins of Madagascar/Shrek comic. 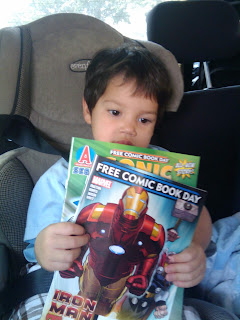 Disco got Sonic the Hedgehog and IronMan/Thor 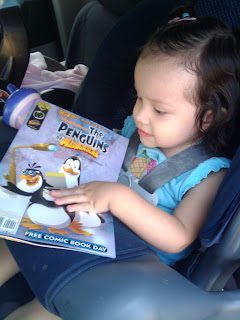 Celi picked herself the Penguins and Shrek issue 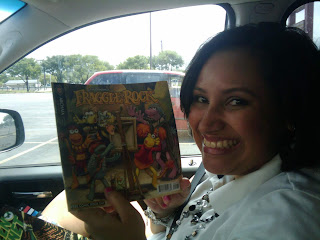 KC got herself a Fraggle Rock comic.
I got GiJoe, SuperMan and Green Hornet.  MaddSkillz wasn't with us and was unable to participate.
Afterwards KC didn't know what to think of the comic book store.  She had never stepped foot in one prior to this event and didn't understand why grown men would play "War" in a place like that.
When we got home, I explained how to take care of their books and gave them some bags and boards I had. 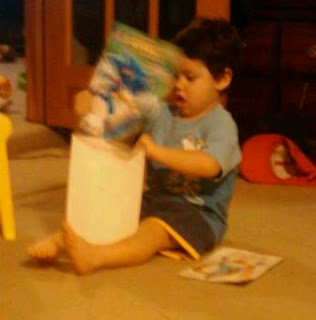 I really enjoyed my first Free Comic Book Day.  Sure I got a few free comics, but I really haven't looked at them yet in all honesty.  What I really enjoyed most was telling my kids about the comics.  They seemed to have a genuine interest and have a place to store them when not reading.
I'm hoping we can do this every year. We could only hit one place this year because of prior commitments.  Next year, I hope to scour the city.
Did you take advantage of Free Comic Book Day?  If not, how was your weekend regardless.
Have a great week my friends.
fraggle rock free comic book day gi joe iron man sonic the hedgehog superman thor