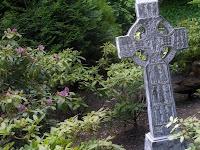 In case my blog is your news source for all your local, national, and world news updates; Ed McMahon, Farrah Fawcett, Michael Jackson, Billy Mays and Steve McNair have all died in the past few weeks. Along with those notable deaths, hundreds of non-notable people have died as well.
Unless this blog blows up bigger than Perez Hilton's, I will more than likely be on the non-notable side of the news when it comes to my deaths. Sure my family, friends and co-workers will likely not be happy, but anyone outside that sphere of influence will more than likely not care.
Just in case I die before my time or develop Alzheimer's and forget what I want, I would like the following to happen when I die.
The following are different options you can take to be creative at the funeral.
After everything is over, and my body is burned, you may do any of the following with my ashes.
I do not think that these requests are too far fetched. I just want people to have fun at my funeral. Is that too much to bequeath?