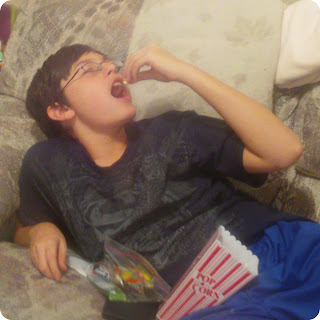 Last week I mentioned how I was going to give MaddSkillz his own post since a lot of them are dedicated to the three middle children. Since that post, there have been two consecutive posts about him directly. So to continue what I started, this is my MaddSkillz post.


MaddSkillz is the oldest kid in Boltonshire by ten years. It makes it hard for him to try and relate to the next oldest kid (Ladybug, 4). He was the only child for a really long time when it was just him and his mom.

I first met MaddSkillz when he was 6 years old. I was overly smitten with his mother and she talked me into bringing some Rocky Road ice cream to her house. So I did. I get there and he's there lying on the couch sick. I think he was watching Jim Carrey's "How the Grinch Stole Christmas". He had the covers pulled up to his chin and I remember his hair was nicely cut.

When we got married, MaddSkillz is the one that gave his mom away. I also asked him first prior to asking either of her parents permissions to marry KC.

For his 10th birthday I made him a Spider-Man cake. I marbled the cake with blue and red food coloring and gave it a web look. Which was covered by the reddish-pink frosting on top. I drew Spider-Man's face with the icing. It turned out pretty good until the middle of the cake fell and it looked like he had his wisdom teeth removed then sucker punched by The Green Goblin. That was the first birthday that my family attended of his. It was a great time.

I was in the attic earlier this year and found a box of unopened toys from that party. One I think is a backpack tank that you fill with water and shoot it out a cannon. I think I'll surprise the kids or KC with that one day this summer.

I'm not sure what was wrong with him.

I introduced him to professional wrestling. His mother loved that I did. In 2005, probably the biggest star at the time was John Cena. For those that didn't follow at the time, he was a white boy gangsta living the thug life. He was the Professor of Thuganomics. His finisher was called the "F-U". One of his big rivals was Brock Lesnar, who's finisher was the "F-5". It was called the "F-U" to contrast Lesnar's signature move.

So one day we're watching RAW and Cena is about to finish someone. Mom walks in the room just as Cena finishes the guy off.

I quickly had to take care of the situation and tell MaddSkillz that he can't say the finishers name EVER AGAIN!!!

Since then, in an attempt to be more TV-PG, the name of John Cena's finisher was changed to "The Attitude Adjustment.

We've been to quite a few wrestling events. A house show, a Raw, Royal Rumble and WrestleMania 25. My wife gets mad because I have yet to take her to ONE Tim McGraw concert.

In 2007, we went to the Royal Rumble when it came to San Antonio. They had a Fan Axxces event where they called people up on stage based on their signs. MaddSkillz got called up for his Batista sign and was asked who his favorite wrestler was and he told them Eddie Guerrero (Eddie had died about 18 months prior). Then in front of a few hundred people MaddSkillz did the "Eddie Shake" or whatever it was called and yelled out "MAMACITA" over the microphone. This could have been the first time he felt the rush of being on stage. 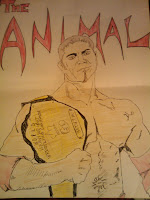 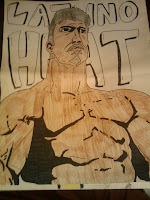 The Batista Sign At Royal Rumble   Eddie Guerero Sign For House Show
He got the acting bug probably around late 2007. He wanted to be an actor and filled out the forms on the internet to get in contact with people. "Agents" would call us and KC took him to one and they gave their schpeel. It would have cost around $1600.00 for 12 months or something.

He had a history of quitting things once he got started.

I wasn't going to shell out twelve-hundred bucks if he was going to quit. So I told him to find stuff locally and through school. He didn't like it because he wants results NOW and didn't know how to go about "looking" for parts. A few weeks later he said there was a play at school and he was going to audition. He called me at work after the audition and told me he got the part.

I put that in my "Top Ten Proud Times of Being A Dad List".


Since then, he's been in more plays and greatly developed and grown as a person. There are times where his pisses me the heck off, but I don't hold it against him for too long. He can be hard headed and be arrogant at times.