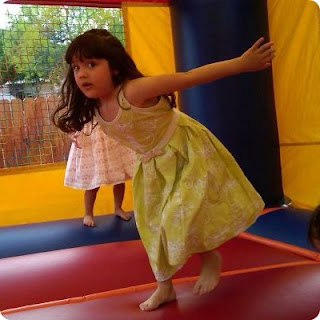 I hope that my three readers had a great Easter weekend.


My April Fool's Joke was split with my readers and had pretty much an overwhelming success at home and work. My brother in law was the only one that I talked to that knew I was screwing with him. My family gave their obligatory congratulations before I told them it was April Fool's.

I mean, if you've physically been around us the past 4 years chances are we weren't joking. We found out we were pregnant with Disco in March of 2007, Celi in April of 2008, Em in May of 2009. So finding out we were pregnant again should not come across as a big shock to people that know us. I'm actually surprised that no one has asked if we were before this.

I also knew that my mother in law would not be fooled. She has some mystic connection with the inside of my wife's womb and knows when she's pregnant. She played along with it and expressed her congratulations.

At work the news spread pretty quickly. I was working from home and forwarded my picture to a friend. She bought it and I let her in that it was a joke. She then took my joke and made it her own. She proceeded to tell everyone that I was expecting again. Since I wasn't there, I'm pretty sure they were like "OMG, get cable or something."

Seriously, it was an excellent picture. I had yawned about 10 times to produce the red eyes, and I even held the pee stick with a wad of toilet paper. Not to mention my mad photoshopping skillz with placing "PREGNANT" on the picture!!

That last part got MaddSkillz, I showed him the picture in the van after school and he just about freaked the crap out. When I let him off the hook he exclaimed his apperception to God that we were not pregnant again. Honestly, he could not deal with another sibling. It's sad, and I don't know how to get him that siblings are excellent resources for slave labor.

We hung out at KC's uncle's for the afternoon. Towards the end of the visit, there was an Easter egg hunt. Well it wasn't really a hunt, it was a free for all. Hundreds of plastic eggs were scattered across the ground and it was a race to see who see who fill their baskets up the quickest. I don't remember the kids having done one before so I explained the rules.

See an egg, put it in your basket and don't feel sorry for the smaller slower kids.  It's kill or be killed.

At the beginning, Disco was being nice and putting eggs in his little sister's basket. It was sweet. Everyone pretty much got the hang of it and I hung back to take pictures.

The range of ages went from about a year to at least seventeen. The 17 year olds were acting like they were hunting for copies of New Moon or something. They were relentless. I heard parents telling them to chill the freak out and let the little ones get some eggs.

Ladybug managed to fill her basket up.

I was quite impressed with her hunting and gathering ability. 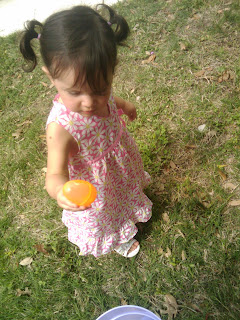 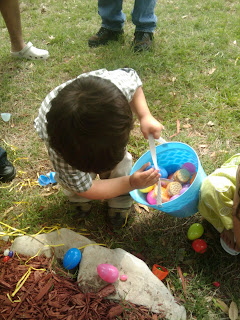 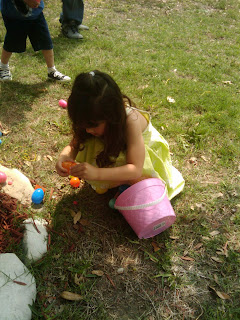 On the way home, I realized that celebrating Easter at families houses is almost as bad as Christmas when it comes to bringing things home. It can get insane. The van was loaded with plastic eggs, Easter basket grass and melted chocolate. The kids' Nana and Grandpa gave them Easter baskets with gifts and cascarones.

For anyone living outside San Antonio or not of Hispanic decent it's a confetti egg.
I have a hard enough time keeping the house clean without 2 dozen cascarones given to my children. So we didn't tell them about those particular gifts when we got home.
Again, I hope everyone had a good weekend. How did you celebrate or not celebrate the holiday?
april fools joke easter easter egg hunt