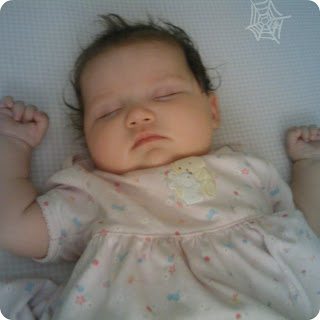 
It doesn't surprise me that this blog consists of stories from three main characters living in Boltonshire. It's just that Ladybug, Disco, and Celi are who I deal with a majority of the time. When I run errands, I'm taking any combination of the three. Who do I make breakfast for? Ladybug, Disco, and Celi. So it's not like these three kids are my favorite, it's just they are the ones I have the most interaction with.

So because of the lack of stories with Em and MaddSkillz, I'll catch everyone up on my bookend children.

Today it will be about Em.

Em is now three and a half months old. She was born two days after Christmas which means it's going to be very hard for us to recover from Christmas to remember to have a birthday party for her. Honestly, she won't know the difference the first few years of her life. We can point her to a birthday cake on January 14th and tell her to blow the candles out and she won't be any wiser.

She was also born a few days before our wedding anniversary. Which means we have to get her expensive gifts for her birthday on years KC and I want go on an anniversary getaway. The expensive gifts are to make us not feel guilty while we are away.

In the past few weeks she has started "talking" a lot. Usually it's when she's laying down and in bed. It concerns me because I think she could be like that kid from the Sixth Sense and she could be talking to dead people who don't know their dead.

It would explain why KC complains about it being cold all of a sudden in our room.

She spends a lot of her day sleeping and eating. The fact that KC breastfeeds her means that I don't have as much interaction as I would like. When KC is gone for extended periods of time, I am able to feed her via bottle and defrosted breast milk.

She is like her oldest sister was in regards that she will not let me sit down while holding her. She could be relaxed in my arms after I walked back and forth around the house. I go to sit down, while holding her in the same position and she FREAKS THE HECK OUT!!!!

I stand back up and she's fine. She does the same thing when I'm holding her and I move one arm to pick something up. She thinks I'm going to drop her or something. I haven't dropped one yet. That KC knows of.

When I hold the kids and try to put them to sleep I hum a song. It usually is something that I don't intend on humming, it just comes out and it each kid had their own unique song. For Ladybug it was just some melody I came up with. It was probably some old song that I couldn't place and just hummed it to her. For Disco it was "Wheels on the Bus". When I would put Celi to sleep "Amazing Grace" always came out. For Em, it's the "The Air Force Song".

You know,
Off we go into the wild blue yonder,
Climbing high into the sun;
Here they come zooming to meet our thunder,
At 'em boys, Give 'er the gun!
Down we dive, spouting our flame from under,
Off with one helluva roar!
We live in fame or go down in flame. Hey!
Nothing'll stop the U.S. Air Force!

KC looked at me like I was retarded when I first told her about this.

Em is the only kid we've had that has the same light skin tone as I do. Her hair is light and her eyes are not brown like the other kids. With KC being Hispanic, those traits have been pretty much dominant with all of our children. Aside from Disco, while he does have slightly darker skin than I, he has my wavy hair. KC has been wanting Em's eyes to turn hazel (like mine and none of the kids) for the past three and a half months. They're in a grey stage right now. So we'll see where that goes. KC has even admitted that if Em gets hazel eyes, she'll be her favorite.

Em is also the only child who does not talk back to me AND she sleeps through the night...

Which makes her MY favorite.

Have a great day my friends.
being a dad dad blogs em favorite kid