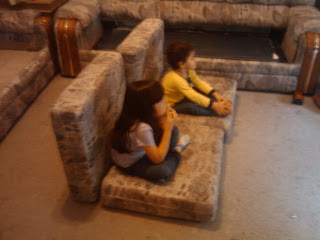 For whatever bad parenting decisions we were making, we allowed the children to watch TV.

A whole lot of TV.

Now my kids weren't glued to the tube at all hours of the day mesmerized by the glowing ambient light emitting from the 27 inch babysitter. They would want to go out and play, or end up playing during the show in their room. Both my wife and I felt bad about the amount of TV they were watching.

Sure they've learned quite a bit of stuff from the cartoons.

My daughter can be a Marine Biologist from all the SpongeBob she's watched.

But with the weather finally clearing up, time in front of the TV needed to be moderated. As well as the arguing about whose turn it is to watch their cartoon. Fights, arguments, and fits would erupt if one of the kids didn't get to watch something when it wasn't their turn. My daughter being a bit of the drama queen lets her brother know quite often in "subtle" ways that she does not want to watch what he has chosen to watch.

Case in point, Team UmiZoomi. It's a newer cartoon that focuses on counting, math and patterns. All three kids have learned a lot from watching the show. It is currently Disco's favorite cartoon beating out Blue's Clues and Fresh Beats. During the show, the characters are singing their songs and Bot's part goes like this:

So to show her irritation with the show when she would rather be watching Sponge Bob, Ladybug remixes it into her own version.

I'm NOT Bot.
I CAN'T show you anything.
On my belly belly belly screen.
NOT a Skyscraper!
NOT a Taxi!
NOT a Traffic Light!

Now it may not be an original, but the negating the song sure does piss her brother off and she loves doing it.

And because of these fights and to moderate the TV time, I instituted "TV TICKETS" a picture of them is below.

I printed them on Word in the address label format giving me 30. I give the kids (Ladybug and Disco) three TV TICKETS in the morning. Each ticket is good for one half-hour cartoon. It can be what is coming on TV or it could be one that is recorded on our DVR. It cost two tickets to watch a movie. Now, one person can either pay 2 tickets to watch the movie, or they can each contribute one.

The person who pays the ticket gets to watch what they want to watch. When that show is over, the other person can have the option to use the ticket or not.

The tickets are only good for that day between the hours of 8AM and 5PM.

So far the plan has worked pretty well. There hasn't been any fighting about who watches what or who can't watch what.

They were excited about the ideas of spending tickets, that they would spend them just to spend them. Ladybug picked a show she doesn't really watch and then they left the room for the remainder of the show. Disco did the same thing with a show he watches all the time.

I'm really glad it's working out. While they were not always spending time in front of the TV. We knew it was too much time and it had to be corrected.

Do you have a system or certain times your kids can watch TV? Do they fight or scream if they can't watch something they want? Feel free to use the TV TICKET for your own use with whatever rules you want to implement.