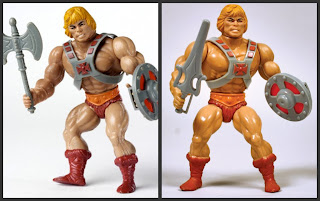 Being a kid with divorced parents sucked pretty fierce growing up. But one thing that seemed pretty cool for a kid was that my brother and I had DOUBLE the birthdays and Christmases. Actually it was more like four or five when you counted all the visits to the different grandparent's houses. I particularly remember one year, my mother was the last Christmas my brother and I had celebrated. I want to say it was actually Christmas morning. My brother and I woke up to go to the living room and see our next spoils of war.

95% of the gifts we got from our mother, we're already aquired at our previous Christmases that year. Looking back, I can see my mother's deflated pride. It was something that she worked for and her kids tossed the duplicates aside because she happened to be last that year.

Fast forward twenty-five years or so.

With MaddSkillz having about the same number of Christmases that my brother and I had, history is bound to repeat itself sometimes. His dad's parents are good about calling us and asking what he wants. We give them a list and we tell them what we're already getting so there's no duplication. His dad on the other hand doesn't care and MaddSkillz is not allowed to bring any of the gifts from his dad's house to ours.  We don't give a stink what MaddSkillz does with the gifts we give him.  They're his gifts and shouldn't have limitations and boundries where he takes them.  If that were the case, MaddSkillz would be going to his dad's house naked every other weekend.

All this is just set up, I promise.

We live about five minutes from Sea World San Antonio. Because tickets cost $50.00 - $65.00 for a day's admission, it's hard to bring the cash together to take the whole family. One day we were driving past Sea World and Ladybug wanted to see the roller coasters. So I pulled into the entrance and drove up the main gate and showed her Sea World. I got really excited, I talked to KC about going and she was thinking the same thing. We drove home and pulled up the prices of tickets and season passes. We decided that we could afford year passes for everyone. We were excited that if we wanted to wear the kids out get the kids out of the house for a few hours, we could hop in the car, drive a few minutes, and go look at dolphin shows or something.

This was on Friday.

Sunday, MaddSkillz comes home from his Dad's house and tells us he got a season pass to Sea World.

But it has to stay at his Dad's house.

I was kind of upset and deflated.

Only because I didn't have the passes in my hands yet, you know?  I wasn't first.

I mentioned, we could offer to reimburse his dad for half the pass, that way MaddSkillz can bring it home with him.

MaddSkillz doesn't like that idea. Mainly because they got what is called a "Fun Pass" (good until 01/02/11) and we were going to get the "Yearly Pass" (good for 12 full months from date of purchase). MaddSkillz thought about the times he would like to go with his friends and he wouldn't get the extra benefits on the Fun Pass as you get on the Yearly Pass.

We're going to get the passes for everyone anyways.

This isn't the first time, I've thought of something and then MaddSkillz comes home and his father did the same thing or similar. So I'm going to think of things right now in hopes that his father will not let me down and beat me to them as well.

I think I hit on all the major ones. Let's see what happens.

Do you have a relative or someone that buys gifts or things for your kids before you have a chance too? Does it deflate you or are you like, "heck yeah, less I have to pay for"??