I was notified last week that I won an award for my blog. Now I know that first sentence is making people go,
"What the heck for?!?"
Well all you naysayers, I won The Sunshine Award. 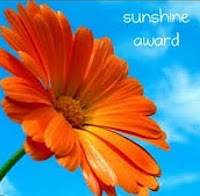 The Sunshine Award: The Sunshine Blog Award is awarded to bloggers whose positivity and creativity inspire others in the blog world.
One of my Lurkers felt I encompassed the mission statement of this award. Sure I have blog posts about being cynical, I want my daughters to avoid boys at all costs, and I won't allow my son to go to the prom with a high school cougar. But I'm positive that my feelings are justified.

Creativity is also a characteristic of the Sunshine Award. Heck if Babies in Beards has showed anyone how creative I am, I don't know what has.

So thank you Que. Thanks for your vote of confidence.

It's very hard to narrow it down to only five.  There's a lot of great blogs that I read.  I read mostly parent's blogs and I comment on them and talk about me and my life.  So when they post their winnings, I'll talk about how I won the award as well.

Five People I'm Giving This Award To:
Luke, I am Your Father - Surprisingly, not a blog about a Sith Lord and his two year old son living in Seattle.
Real Men Drive Minivans - The only guy that let me put a beard on his kid.
Parenting Survival Guide - Doug has NINE kids. I'm giving him permission to slap me when I complain when I have to take FOUR kids to a baseball game.
Fatherhoody - A new dad based out of San Antonio like myself.
Howefitz - Great dad, great views and ideas.  Dad of three.

[-post edit-] I feel bad because I'm "limited" on the number of recipients I can give this to.  But something else is happening next week where others *could* be rewarded for their contributions.

But you guys already know that about me. Let's think of some other things.

1) I'm not scared of many things. But you can count on never see me riding a motorcycle or a horse. I've never ridden a horse, but Superman fell from a horse and look what happened with him. I've ridden dirt bikes and have taken nasty spills on them. I refuse to put myself in a situation where I'm going 65 mph on the freeway and there is nothing between me and pavement.

2) I wasn't scared to jump off a cliff into a river my freshman year of college. I wasn't running from a serial killer and needed to save my life, I just wanted to jump from it. It was about 30-40 feet above the river and it was pretty dang exhilarating. Shortly after that (whether right after I did or the following year), the Student Body President-Elect of Texas A&M University (the school I went too) jumped off the same cliff, got hurt, and paralyzed. Subsequent years going to the river after that, the cliff has been closed to cliff jumpers.

3) This is actually my second blogging award. My first given to my by the original Father of Five, David. He gave it too me around November or early December. I remember being sick around that time and it just being crazy with the baby coming soon. I never got around to thanking him. Thanks, David.

4) I'm more than likely going to get my Texas Real Estate license activated again. I only practiced real estate for a little over a year before I quit due to family needs. For the past 28 months, I have still gotten phone calls from people who come across my name wanting to see or sell a house. I'm working on my website/blog and will most likely only practice part time and from home. I might be showing homes with a kid or two in the backseat sometimes.

5) I used to love to draw. I would draw all the time. I have sketch books full or comic characters I made up in my mid 20's. Between then and now, I broke my drawing hand and spent less and less time drawing. Now I have no confidence in myself like I did 10 years ago in regards to my drawing. I would still like to create a comic book, but I have concentrated more on the writing and character part rather than how cool to make them look.

So there you go. Thanks again to Que for the award love. Everyone be sure to check him out as well. Have a great weekend my friends.