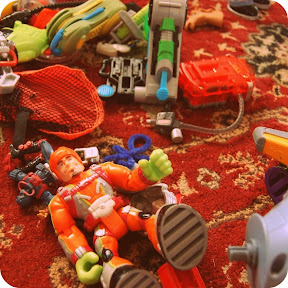 When I was a kid, I loved my toys; He-Man, Transformers, GiJoe, Star Wars, and MASK. Some weekends, my best friend and I would go to each other's houses and have giant wars in our bedrooms. Snake-Eyes versus Carbonite Han Solo. Man at Arms versus Autobot Mirage. Matt Striker's Thunderhawk versus a Tie Fighter. Decepticon Skywarp versus Cobra Rattler. I know my female contingent will not get any of those references.

It was the greatest cross promotional battle of all time.

That's when I loved toys and toys were cool.

Now that I am a parent, toys suck and they are not cool.

Now since MaddSkillz is 14, he doesn't get "toys" any longer. So he doesn't count.

Em's too small to appreciate them, but that doesn't mean she won't be getting them soon.

I have come to the conclusion that anyone who gets toys that have more than one part assigned to them HATES ME AND WANTS ME TO BE MISERABLE!!

I had to tell my MIL two years ago that I would not let her give my son a jungle set because it had too many pieces. She still had it and I was like, what the heck give it to him for Christmas. Now every time I go into my kids room, I step on the dang elephant and it screams out an elephant yell or whatever elephants do.

Try sneaking into the room at night trying to put clothes away without stepping on something that screams, cries, blares a siren, or sings "I love you I love you, morning noon and night."

We have three toy boxes in the living room. One each for Ladybug, Disco and Celi. There's only three because I took out the crap that I know they don't play with any longer. If I didn't, there would be SIXTEEN toy boxes. This stuff was put in a bag that is supposed to go to Goodwill.

Well, the bag hadn't made it to Goodwill and the kids found it. So Ladybug goes through the bag looking for toys that she wants to keep.

I hate you procrastination. I work a block away from a Goodwill for Pete's sake.

After many years of research, this is what I found out about toys and my kids:
- Ladybug will be more interested in what her brother gets than what she gets.
- Ladybug will want to play with her brother's toys and exclaim the he is not sharing when he won't let her.
- When Disco wants to play with her toys, the sharing thing obviously only pertains to his toys.
- One child could not play with the toy for months. They could even forget about it, but if another child finds that toy and plays with it, the sharing rule comes back into effect.
- Celi knows that blocks are good for hitting her brother in the face when he's being mean.
- MaddSkillz will want to play with the kids toys, but when they find their way into his room, he will not let them play with the paddleball he got from Chuck E Cheese, SEVEN YEARS AGO!!!
- When getting a Happy Meal, we must get Ladybug and Disco boy toys because we go back to the whole Ladybug wants Disco's toy rule.
- If you cant find a toy, it's best to look behind the TV, on the top bunk, or at the top of the linen closet.
- The above is true because one kid doesn't want the other kid to play with their toy, so they feel it's best to throw it in a place the other has no chance of getting it. Even when it means they can't get it either.
- The living room will be littered with toys by 7:36AM every morning.
- The above even happens when the kids sleep until 7:35AM.
- We can not have blocks in the house. Aside from being blunt weapons to siblings faces, it just causes too much drama.
- When it's quiet and dark in my room at night, I will always kick the Rock and Roll ball my brother got for one of the kids.
- We will never let the kids play with this toy. The kids gather around it, scream at ear piercing levels, then wrestle each other like they're playing Rugby or something. Even MaddSkillz gets involved. They opened it for Christmas, played with it a couple times. Now it sits on the top of our desk out of their reach.

Now I know the kid's grandmothers read this blog (They're actually 40% of my readership) , and this is not a plea to stop buying your precious grandkids gifts. Even if it was, it's your job to spoil them no matter how frustrating and pissed off we get. Just like it's apparently my dad's job to give them Peeps, Soda, and Pop Rocks.

The kids love the toys and are very appreciative of them. Don't let their ranting father ruin any positional gifts for them.

lots of toys too many toys