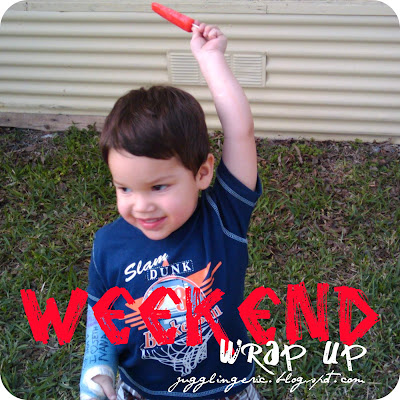 We had a pretty busy weekend. It also didn't help that we lost an hour as well.

Saturday we went to KC's grandmother's birthday party at her grandmother's house. I realized that great-grandparent's houses are not really kid friendly.

So I did what I normally do and made sure that the kids didn't run into a hot bar-bq pit, rose bushes or out into the street.

Inside wasn't much better. There I stressed out when the kids messed with her televisions (plasma's by the way), pictures on the coffee table, and stepped on chips in the kitchen.

KC would tell me not to worry about it, but it was hard not too when Celi was messing with the remote to the TV's and was pretty close to knocking one down.

The kids had a great time despite their father's compulsive rising stress levels. They played football in the backyard where Disco would barrel through his girl cousins on a way to a touchdown.

You may think that a great-grandmother's birthday party isn't a fun place to be, but just check out my sister-in-law's Facebook status during the event.

And this was close to 7pm. We left around eight. No telling how many more Corona's lost their lives that night.

I have five kids and a wife to get ready. The fact that we get there prior to the alter call is a miracle of God himself.

So if we get to church for the 11am service, and it's usually done by 12:45, then when we change the clocks ahead when it's over it's close to 2pm already.

The back yard was littered with more cans, some old clothes and torn up cardboard.

The trash all over the place was thanks to Happy. I knew he would grow up to be annoying me when we kept him.

Sometimes words can't describe the horrifying events which happen as well as pictures, so I'll let you witness for yourself. 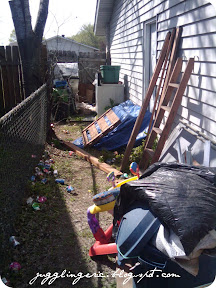 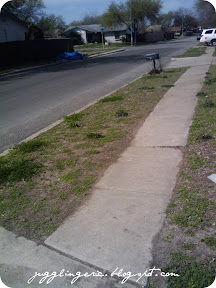 This was the side of the house. You see how horrible it is?? It's quite embarrassing really. I hate that it got to that point. It's really tough for me to be able to be able accomplish projects like this. I would love for it to never be there, but for some reason there is never enough time available to get it done.

And you also see a before shot of the curb and my crappy grass.

When I first got started, my neighbor on the trash side you see above wanted to know if I needed a huge garbage bag like they were using. I thought it was really nice since the only thing I've given them are cans in their backyard and un-mowed grass. The bag can hold like 200 gallons or something. At first I thought it was nice they gave me two, but then I thought they were meaning I had a lot of crap in my yard.

Upon starting, I noticed the below objects in a trashcan. 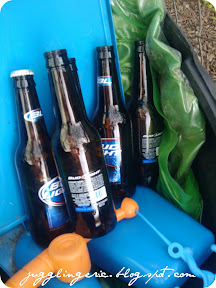 Sure beer bottles are not that big of deal, but when we don't drink beer in our house it twists my brain with the question of "Why?"

At first I thought it was the previous neighbors because they were a bit rowdy. Not as nice as the bag giving ones. But then I checked the born on date and it was 02-09-10.

2010? It was the current ones. Why the heck would they go to their backyard and drop these in my trashcan? They have a recycle bin just like we do. Is someone hiding the fact they were drinking? Was it my family? MaddSkillz? My dad? KC??

There were five bottles and we have five kids. Coincidence?

About two and a half hours later, MaddSkillz and I accomplished this. 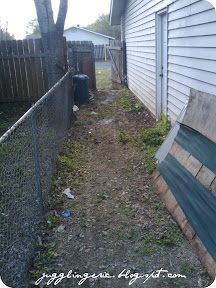 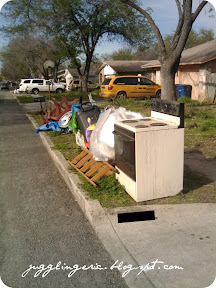 Upfront is also the pool that we didn't take care of, a picnic table that was just taking up too much space, and a ton of other junk. I'm quite proud of our accomplishment.

That's why this is number three.

Now once I get all this crap up to the front, a new story happens. The scrap vultures come and go through your trash taking what they want. Case in point 2 minutes after I finished. 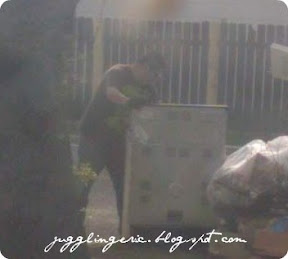 Taken from a surveillance video from MaddSkillz room. Someone was already taking the stove. They also took the picnic table as well.

Where were they when I was trying to get it to the front?

How was your weekend my friends? Did DST kick your butt?

Have a great one.