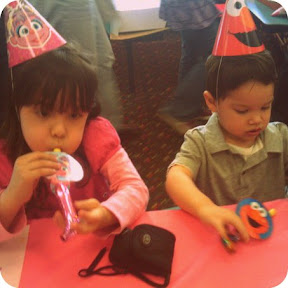 When I walked into my niece's birthday party at 1pm on Saturday, and a time travelling prophet came to me next to the skeeball games and said, "You will be in the Emergency Room in 4 hours."
I would be like, "You travelled all the way through time just to tell me this?? This is my family we're talking about, if we don't go to the Emergency Room on weekends, the hospital administration sends an ambulance out to our home just to make sure we're okay."

If anything of emergent proportions happens in my family, it happens after 5:30pm and on weekends.


Never when it's a normal pediatrician's working day.


So we chose the one where we'd get free pizza.

The kid's had a great time. Grandpa's took turns watching Ladybug and Disco in the play area.

The question of the afternoon was, "What happened to Celi's eye??"

My 15 month old daughter is recovering from a black eye. The kids were playing in their room one evening (see what I mean after hours), a toy was thrown, her face caught it. It's healing up nicely though. But it's still not healed enough for people to think you toss your kids around.

Ladybug wanted her older cousin to hang out at our house. We managed to squeeze her in our van to take her to our house. If MaddSkillz was with us, there would have been no way she would have fit.

Maybe in the Stow-N-Go??

So we get home, Disco is passed out from pizza sauce, icing, and ice cream. The girls want to go play on the trampoline, which I'm cool with.

Disco wanted to go out as well. I thought for a second that he shouldn't, but decided that it wouldn't hurt for a little bit.

Well I was wrong.


I was changing Celi's diaper on the floor of the living room and looked out to the back yard. Disco was crying on the trampoline. This happens often because his sister can be a punk, but the look on his face was pain.


I ran outside and he was holding his arm. I picked him up, looked at his arm and could tell it was broken.


I carry him inside and KC is about to feed the hungry baby. We had honestly only been inside the door 4 minutes when this happened. The baby had been screaming in the car because she was hungry.


I said I would take him to the ER and KC would stay with the kids (most importantly Em).


I pulled a shirt of mine out of my drawer, ripped it, and made a sling for him.


My 2 year old son wasn't having that.


He was in pain and I needed to get him help.


I started the van and he would unbuckle his seat belt. He wouldn't stay in his belt. I had to come back inside and suggest an ambulance. KC said we can just all go.


I held him in the backseat as KC drove us to the ER. When we got there, I jumped from the van with him and raced to Triage. They took us back right away and put a temporary brace on him.


He had no idea what was going on. We got a room and he freaked when he saw the hospital bed.


All my kids freak when they see a hospital bed, they have imaged of needles and IVs being stuck into their precious little arms.


I assured him there would be no needles. We sat the bed, tried to relax and watch SpongeBob.

We had all the information needed to check him in, but we were missing one thing.

He didn't care about the splint. It was that dang band aid looking device on his thumb. That's what was giving him loads of mental anguish. Not the broken bone.

They took us to x-ray and they confirmed the break. They put a soft cast on, gave us the x-rays on disc. Then went home. 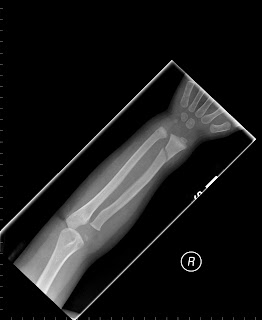 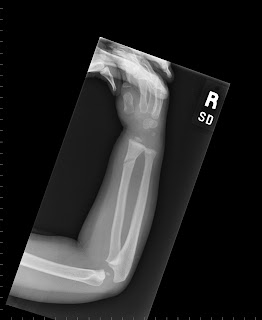 I slept with him on the couch Saturday night. He did pretty good. He's telling his sister "My... Arm.... Broke.." My boy is very smart and very aware

He woke up a little grumpy on Sunday, but they started playing like he normally does. He's not letting this hinder anything he does. He still wants to play and do things a little boy likes to do.

He broke his dominant hand, and he's already learning to do things with his left hand.

I'm secretly hoping that his arm will be healed with super powers. Maybe like that kid in "Rookie of the Year". You know the one where the kid broke his arm and when it was healed he could pitch at Warp 3?

If not, he's already playing piano. 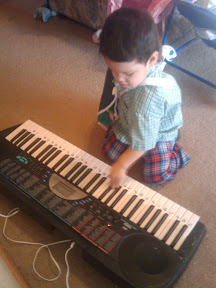 Have a safe week my friends. Watch out for those trampolines.
super powers trampoline two year old breaks arm