When I was a kid, I played Little League Baseball. I was average at best. I had my share of home runs and great plays. I started playing when I was ten years old, so I was behind the other kids who had been playing since T-Ball.

One thing that I excelled at was pitching. My second year playing (11 years old) I was a starting pitcher. The ages for the division were 8, 9, 10, and 11. After a three-quarters season of dominance, the league passed a rule that 11 year olds can not pitch in that division. Citing that the younger players were intimidated by me.

It was the first and only time anyone has ever been so in my life.

I played a few more years and quit in the middle of my fifth year because my coach was a tool. It is still one of a couple things I regret doing today.

But Little League didn't stop there. Every single one of my six siblings has played Little League, with my sister playing at the collegiate level. My dad and step mom were involved in the Little League board for quite a few years. Little League became the Bolton's life. There wasn't a weekend when we weren't at the ballpark for some reason.

I grew to hate baseball.

It was a reason that eventually lead to my parent's divorce after 18 years. Not the actual baseball part, but the politics and people involved.

I hated baseball even more.

Years later I became a dad. I was excited that MaddSkillz wanted to play. He was about the same age I was when I started. His first season we pulled him off for a disciplinary reason. Second season he broke his hand before the first game and sat on the bench the majority of the time. He took a year off and decided to play last year.

By this time he had found theatre and his heart was in that and not in baseball. When I had a chance to practice with him, he would complain about when we were going to stop. Since I had a crappy work schedule, I couldn't go to practices or games. The transportation was left to my wife alone with three babies. There was a problem with lack of organization with the league he was with.

My wife grew to hate baseball.

We decided that Ladybug needed some sort of activity which would wear her the stink out so we wouldn't have to deal with her not wanting to go to bed at a decent hour introduce her to social activity and teamwork. We gave her two options, soccer or baseball.

This week, Ladybug started T-Ball practice. It's not with the same unorganized league that MaddSkillz was playing with but a CYO league.

I don't know if I'm looking through Daddy Glasses, but my kids is a good T-Ball Player. She's wants to play and is excited about it all. She gets in front of grounders and throws the ball right to the person she is supposed too. She knows how to step when she throws, she put her hand over the ball when it comes into her glove (I could never get MaddSkillz to do that part, he would complain about some part of the process).

And she can hit!!

She can't crank it out of the infield yet, but give her time. When I get a tee for the backyard, I'll teach her how to position her feet so she can control where the ball can go. How she can hit grounders, line drives and pop flies.

It has to be the Bolton Baseball Gene.

Here's proof of her athletic ability. 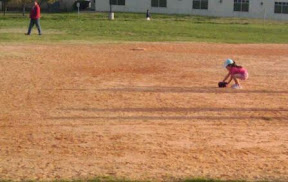 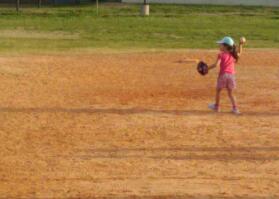 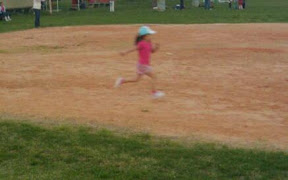 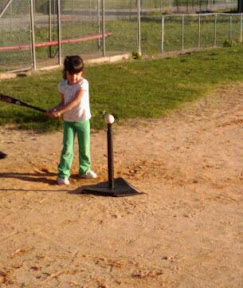 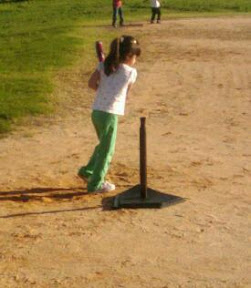 Disco is all about playing too. Even with a broken arm, he's in the grass fielding balls.


I told KC Wednesday night that in two years when Disco is old enough, he can be on the same team as Ladybug.

She shook her head.

Then I said the three youngest (Disco, Celi, and Em) will be on the same team together (a year between each). Two which she channeled Whitney Houston and gave me a "Hell to the no!!!"

"Because baseball is boring, they're going to do dance or cheer leading."

"Yeah, the most dangerous athletic activity there is!!!"

She says that the Bolton Baseball Gene is not going to take over all the kids. Not that I want it too, but if they want to play it they can. I'm not going to be the father who is on the sidelines belittling the kid for not catching a ball or striking out. I knew that person. I lived with that person. They made baseball their life.

I actually don't care if the kids go different directions than baseball. It's just what I know and I feel accomplished when I teach them stuff they can use. I just want my kids to have fun with their lives.

Do your kids "genetically" lean towards something like a sport or creative talent that you or your spouse possess?

Be sure to check out other dads whose kids will be genetically leaning towards being awesome bloggers over at Dad-Blogs.com for Fatherhood Friday.
baseball dna baseball gene cyo dad blogs fatherhood friday T BALL