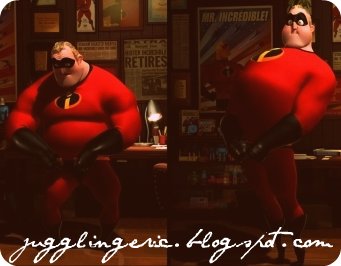 I had been skinny my entire life. All through elementary and middle school, I wore the "slim" sized jeans.

When I outgrew the slim sizes, my jeans and pants were hard to find because I was not waist/inseam proportionate. I'd have to have the obscure sizes of 26/30. It was hard to find at the stores and I'd have to get pants that were shorter just so they fit my waist.

I remember one time in particular where my step mom convinced me that since they reached the top of my high tops they were okay. This was probably the reason why the ladies didn't find me all that suave.

Five years later in 2009, I went in for a physical and my weight was 187lbs. To say I was shocked by the results is an exaggeration. Looking myself in the mirror and the move to pants that were now an even proportion of 36w/36l was a bit of the tip off.

Gaining 30 pounds between 1997 and 2004 really wasn't a big deal to me. I was excited that I was finally gaining some weight. In 2000 I had actually considered having my thyroid oblated so I wouldn't have the high metabolism that I hated all my life.

So what happened in 2004? Well, I hit 30 years of age and a couple months later I was married.

It doesn't help that my wife is Hispanic and cooks amazing Mexican food.

Am I to blame? I guess I could have some responsibility. I've managed to get my wife pregnant four times in those five years and with pregnancies comes cravings. A hamburger at 11:30 at night doesn't sound too bad does it?

Well needless to say it all caught up to me.

Now it's not exactly the weight that's bothering me. It's more of the shape I'm in.

It's tough to play with my kids without getting out of breath a few minutes in. I get really tired and out of breath more often now when doing other things as well.

So I decided to get in shape. I bought some running shoes and Wednesday night I went on my first run in at least 10 years.

Back in college I was in the Corps of Cadets at Texas A&M and we'd run at last three times a week. It shouldn't be that hard should it??

I downloaded an app that tracks my workout. I pulled up Pandora, and it opened with my U2 Radio Station. The song that popped up was "Running to Stand Still"

Wow, how did they know?

I turned on the app and music and started down the block. 100 yards in the music closed down and all I had to listen to was the guy on the app telling me how slow I'm going.

Well I made it around the block and here are my thoughts directly afterwards..

And here are my stats from the app.

I'm kind of disappointed that I was on track for a 10 minute mile. I remember in high school I was doing it with a 7-8 minute mile. In college we would do 3 miles between 18-21 minutes. I thought I was going at a good pace.

The speed is actually an average of my speeds. It took my slowest (0.2) and my quickest (9.7). This part I didn't like, because the .2 was when I was walking down sidewalk to start and when I was done running in my yard before I turned it off.

My goal from this is to be in better shape for my family. Both physically and mentally. I know my wife hates it when I fall asleep on the couch. I want to be able to have more stamina for different activities. I want to feel confident with my looks and not self conscience when I'm holding my baby and she can rest slightly on my protruding stomach.

I want to be a happier person for myself and for my family.

I'm glad I started this and look forward to continuing.

Be sure to check out Dad-Blogs.com for Fatherhood Friday, where other dads can probably run circles around my fat butt.