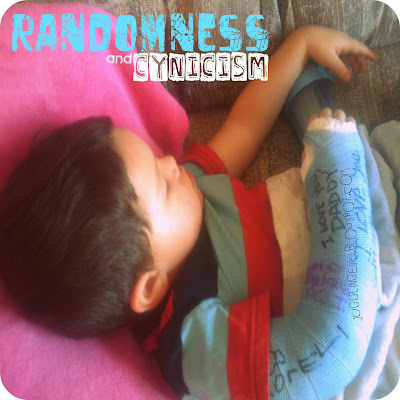 If you've noticed, I'm not posting everyday like I used too. Partly due to the fact that when Ladybug stopped taking quality pictures with my cellphone, that feature ceased to exist.

I was able to get away with five posts a week before because two of them were blow offs if you were. Ladybug's Portfolio and the Thursday Throwback. The Throwback didn't get very good reception, so I backed off doing that one as well.

So without two easy to schedule posts, I'm left with three again.

Though I am tempted to bring back Babies With Beards (Week One / Week Two), just because I know it upset my wife and MIL.

Disco is a machine. The only reason you know he has a broken arm is the cast he's wearing. He's been amazing. He hasn't had to have any pain meds since Monday. He doesn't let us help him with anything. He gets on the couch and up to the table all by himself.

When the Castologist was putting the cast on, Disco said he wanted a pink cast. I vehemently talked him out of it. I talked him into the light blue one you see above. The main reason was so we could all sign the cast.

I thought later that it was a double standard. I wouldn't have minded that Ladybug picked a light blue cast, but I would have pushed for a pink one though.

Ladybug is 4. In clothing size, that means she should be a size 4T. Since we don't live in a perfect world and she is a tall beanpole like her Daddy used to be, she has to wear a size 6 in little girls. Notice the "T" is no longer there. I found 5 shirts at Wal-Mart Wednesday night for 4 bucks each. She looks like a big girl now. This makes me sad.

She wants to go to school very bad. Her birthday is in October, so she's a "late starter" in that regards I guess. We're going to try to hard to get her into a Pre-K this coming September.
I took 24 off my DVR list. I loved the first 4 hours of the show. But after the assassination attempt, I felt it was crap. Especially with that blonde chick and her d-bag ex-boyfriend. I really wanted Freddie Prinze-Gellar Jr. to get all Jack Bauer on people, but when I was watching he was just in the background. A few recorded episodes sat unwatched and I just had to let it go.

If I knew that having kids would mean I would constantly have piles of clothes on my couch, I would have possibly thought twice about having so many. Or maybe I should get rid of some of the couches.

I'll leave it there. But before you have a great weekend, be sure to check out Dad-Blogs.com for other dad's who have couches with clothes constantly as well with Fatherhood Friday.