Remember picture day in school? Most of us would dress nice and put on our best face and take a picture. Then six to eight weeks later, we'd get a packet and say "WTH is that?!?"

The picture looks nothing like you. There wasn't multiple shots to see which one was the best. It was just a one time click.

I guess it didn't help that every picture after 6th grade made me look awkward. Visiting my grandparents house, my wife would see my old pictures and say "I probably wouldn't have dated you back in high school."

So apparently her standards dropped afterwards.

Now a days, my son can come home and there's an option for retakes if we don't like his picture. They just give us a proof and tell us to order on line. Yes it's more efficient, but where were you technology when my face cleared up a few weeks later?

Anyways, I was playing with my GPS the other day and when I got home it showed me this from Google Maps Street View. 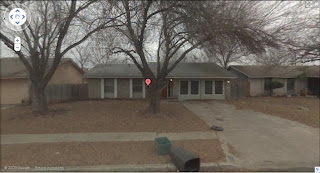 This is my house. Look how dreary it is. You would probably think this is the normal after my post last week. But my house looks depressed. There's no sunshine, no light. This photo had to be taken in 2006-2007 time frame. I say that because there is no cars broken down in the driveway.

So, I would like to know who I need to talk to at Google to get a picture retake.

But it can't be anytime soon. My front yard is craptastic and not very attractive. Let me clean it up and I'll let you know when it's okay Google.

Can you find your house on street view? Do you approve or would you want a retake as well?
google maps google streetview school picture retake